Welcome back fellow Wafflers to the odyssey that is Ardbeg through the ages. We left our tale at a perilous standpoint, with our hero of a distillery surely doomed to closure and eternal obscurity. We resume the story in 1986 and Ardbeg has been shut for five long years. But the whisky community did not forget…

Ardbeg: A journey through time – the coming of age…

Some hope emerges for our protagonist in the form of new owners, Allied Lyons. Could this be the salvation for the distillery and the wider community? Sadly, no. It is a false dawn, and Ardbeg is run merely to become one hundredth of a bottle in AL’s blends. No one has the foresight to recognise this was 99 parts too few…

The distillery is neglected and once again it is unjustly left to dwindle to nothing. Surely this time, it really is the end for our hero.

Finally, just when all seemed lost, someone sees the light! The folks at Glenmorangie realise that one day this quaint little establishment in Port Ellen could actually become one of the greatest distilleries in the world. It could even have a go at producing one of these new-fangled single malts! Or at least this is what Glenmorangie’s Dr Bill Lumsden, head of distilling and whisky creation believes. And when you have a title as impressive sounding as his, anything is possible.

The new owners open the creaky doors to the old bond store to reveal… barrels – housed there since the 1970s! We can only imagine the size of the grins on faces that day. This vintage product marks the beginning of many special one-off releases.

The new owners begin work as if they want to make up for lost time. Progress is made remarkably quickly. Renovations to the visitor centre are duly carried out and the now famous Old Kiln Café is installed. More 1970s bottlings are released. And our hero is starting to get noticed. It doesn’t take long before there is a shiny award on the wall of the renewed visitor centre with the words ‘Distillery of the Year’ emblazoned on the plaque.

One-off releases are doing their job. But what Ardbeg really needs was an identity; a main character. This arrives in the form of the 10 Year Old, young and fiery, peaty and heavy, and yet balancing seaside elements with oak and vanilla. It is quite unlike anything else on the market. And the world approves.

With its standard bearer firmly realised in the form of the 10 Year Old, Ardbeg decides to push the boundaries further. The one-off bottlings have been very successful, so why not release one every year? This trend begins in 2001 and continues to this very day. First is the Lord of the Isles, followed by bottles such as the Airigh Nam Beist, Serendipity, Rollercoaster, Gallileo, and the much sought after (at least by us Wafflers) the Alligator.

Another regular release joins the Ardbeg stable, this time an even more fascinating drop, the cask-strength Uigeadail (or Oogie as we Wafflers affectionately call it). Spending part of its maturation in sherry barrels adds another layer of complexity to this already multifaceted drop.

The baton changes hands once again. From Duncan McDougall via fifteen others, Michael (Mickey) Heads becomes the latest distillery manager for Ardbeg.

Worldwide recognition is only a matter of time for our hero. The famous Ardbeg 10 year old wins Jim Murray’s world whisky of the year award, and brings greater renown to the growing brand.

Ardbeg makes it back-to-back when the Uigeadail follows in the footsteps of the 10 Year Old and reclaims the world whisky of the year award for the distillery!

Buoyed by this success, Ardbeg expand on their main range with the heavy and blazing Corryvreckan and the light and restrained Blasda.

The 2009 special release, even by Ardbeg standards, packs a peaty punch. It is appropriately titled the ‘Supernova’, and it goes on develop cult status among the ever-expanding legion of Ardbeg fans.

Finally after years of yearning, this particular Waffler’s dreams come true, and Nick stumbles into Port Ellen, first stop: Ardbeg Distillery. He has a magnificent time, checking out the stills and the bond store before settling down in a comfortable chair to sample the wares and chat about the history of the great distillery. He could not be more pleased for the establishment that they near their 200th year as distillery and continue to make one remarkable drop after the other. He decides that Ardbeg truly is a hero and vows to one day chronicle the saga of its tumultuous, but ultimately highly successful life. 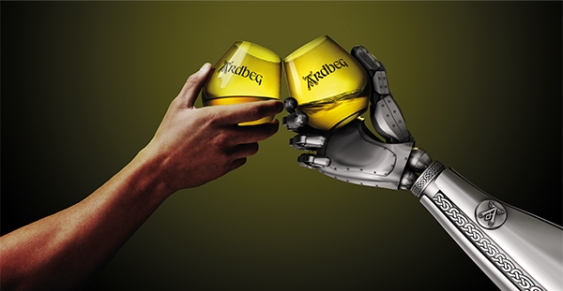