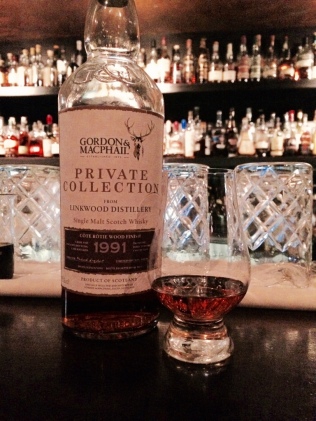 There are a lot of distilleries out there many people have never tried because all their wonderful product is being snapped up by the blenders. This is a remnant of a bygone era where single malt – especially single cask – was rough and dirty. Blenders swooped in to save the day by watering down the volatiles and mixing young and mature scotches together to smooth it all out. However single malt and single cask only taste bad if the distiller doesn’t know or care about what is going into the bottles at the end of the process. If it’s all about getting drunk, why would anyone go the extra distance for a fine product.

Fortunately, people are changing and the market is changing. Single malt is here to stay, and single cask releases are the bastion of exclusivity and discernibility. This has allowed some of the bigger whisky families to experiment every now and again with small amounts of their product and sometimes that creates a pretty special drop. The Linkwood Côte-Rôtie fits this bill for two reasons. First, it is a distillery owned by the global secret council of big whisky owners and is predominantly used in blends, including as a nice addition to Johnnie Walker’s vatted malt, which means there are specific flavours that are not usually separated and given their own podium. Second, it has been bottled independently by Gordon & MacPhail, so the final product has been selected by people whose primary expertise with whisky is casks and maturation. There is going to be something unique coming from that combination.

This one has also been finished in a very specific type of red wine cask giving it a rich and fruity smell with something very special coming from the grape influence. There are caramels and sugary honey but dominated by the smell of wine and vine mixed in with the actual wood itself, which I assume is European Oak unless the spice of the fruit is engaged in deception and subterfuge.

On drinking this whisky for the first time I thought this will be the one I tell everyone to try. And while I still will tell everyone to try it, on reflection I’m sure it’s not for everyone. Which brings me nicely to the point regarding the cask. The more whisky someone drinks, one of two things happens; either the person will get closer and closer to deciding the one whisky they want to drink at the expense of all the others – what I like to call “the wrong thing” – or they get more and more adventurous and inquisitive about different types and flavours. A batch of a well-known favourite finished in an unusual cask is a great way to see how important aging really is.

This one has spent two and a half years in its finishing cask, which is quite a long time in absolute terms. It is also well matured in general and you would expect a higher level of wood as a result. On the palate, the Côte-Rôtie has a lot of wood. I think that’s a good thing and that it really works for this particular drop. Those who like the simpler and sweeter whiskies will probably think this one has too much tannin, which is often the result of red wine finishes and long oak maturations. Surprisingly though it has not lost some of that underlying sweet complexity. The honey and caramel transfers through with some tart apple and cinnamon/nutmeg in the background.

A vino bomb is not for the immovable whisky drinker who has found the one flavour they want and doesn’t like anything else but, for the intrepid explorer who wants to backpack through the Rhone Valley and pop the bung on a nice red every couple of hours, sit back and quaff with a woody wonder.