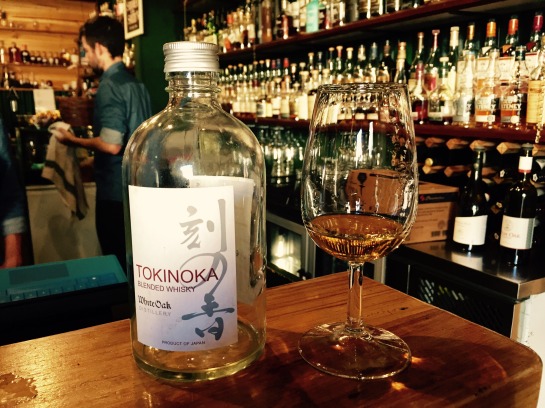 Japanese whisky is meant to be the best thing since sliced sushi right? A freshly caught blue fin tuna at the fish market would blush at the prices commanded by even a basic Japanese dram (if it still had any blood left that is). So why the bloody hell isn’t this one any good?

I suppose I shouldn’t be surprised, as I have a history of being disappointed by releases from White Oak Distillery. On my previous tasting attempt I found the Akashi NAS to be a forgettable cup of blah, while the 12yo had this weird sulphuric, mineral hot-pool vibe going on.

Needless to say, I set my bar very low when it came to trying the Tokinoka and it met my expectations with aplomb… by which I mean it would be a definite contender for winning a limbo competition, if you get my drift.

The nose is distant and it takes a really good deep sniff to actually capture anything. The eventual effect is like a walk past an orchard in summer… if the orchard was on the side of a volcano. That weird sulphury thing from the 12yo makes an unwelcome return as well as a whiff of hot metal. The palate is actually quite spicy… for about two seconds, after which you are left with a vague oiliness. It’s not terribly satisfying and the finish hints of glycerol (which I’m sure is not in there, but that’s what it feels like).

Hard-core Japanese whisky otaku may as well give the Tokinoka a try for the lolz. Everyone else, just grab yourself a good cup of green tea, you’ll feel a lot better afterwards.