Hrafna-Flóki Vilgerðarson, or Flóki as fans of the History Channel’s hit show Vikings would recognise him as, was a pretty interesting guy. Born around 830AD in Norway, he would later become an explorer, with his main claim to fame being that he was one of the first people to visit Iceland.

Acting on rumours of a land North-West of the Faroe Islands, Flóki set sail with his family and crew, taking with him three ravens. According to legend, Flóki released the ravens during the voyage; the first flew South-East back to the Faroes, the second landed back on the ship, but the third flew North-West and did not return, leading Flóki to the island and bestowing him with the nickname Hrafna, meaning raven.

The crew apparently spent an excellent, easy summer on the West coast, leaving them ill-prepared for the harsh winter that followed. When spring finally returned, Flóki climbed the highest mountain in the area and sighting ice flows still sitting heavy in the fjords even as the weather warmed, named the island ‘Ísland’, or Iceland as we now know it. On his return to Norway he gave a poor report of the place, although that did not stop him from returning and living there until his death in the early 9th Century.

It is therefore fitting that a modern day pioneer of Iceland takes its name from the spirit of this early explorer of the Northern seas. Flóki, made by Eimverk Distillery, is the first single malt whisky to come out of Iceland.

Based in Garðabaer (perhaps taking its name from another early explorer of Iceland, Garðar Svavarsson?), the whisky is billed as ‘Grain to Glass in Iceland’ (aka Paddock to Plate), using local barley and water distilled in Eimverk’s handcrafted pot still and, according to the blurb, “aged for three years… under the roots of Mount Hekla”.

The particular bottle in my possession is part of a limited edition single-barrel bottling released in November 2017; according to the label I possess Barrel #1 Bottle #307. I will admit that I experienced a brief moment of doubt about opening it, but in the spirit (geddit?) of science I have taken the plunge for you dear reader.

As mentioned before, the Single Malt is aged for three years in what the label curiously describes as ‘ex-Flóki Young Malt barrels’. I have previously reviewed the Young Malt, a special edition duty-free 1-2yo spirit released as a preview to the main event. I am assuming that after the first release of Young Malt in late 2014, which used virgin American oak, they refilled the now-seasoned barrels and left them for just a hair over three years for the Single Malt.

The packaging game has always been strong with the Flóki and this one ups the anti by including a box! The box artwork has a black gloss background with irregularly shaped matte black highlights, the effect of which I suspect is meant to look like the rock walls of a fjord. The cool viking crest makes a return and oh my Odin I have literally just realised it has three bird figures around it representing Hrafna-Floki’s ravens! Totally did not pick that up before. 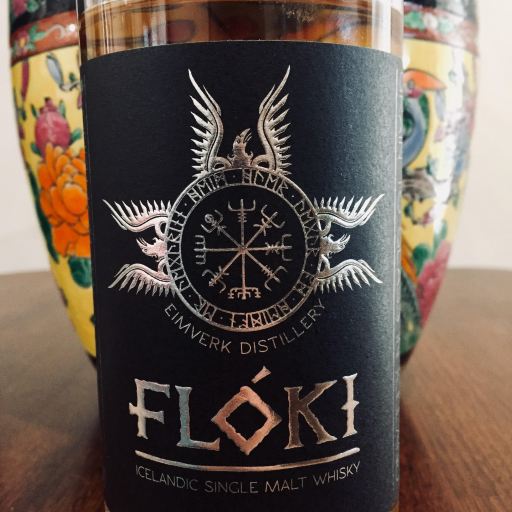 Bottled at 47%, the Single Malt is a natural copper colour. It’s actually lighter than the Young Malt, which has a redder hue that is probably an effect of the virgin oak compared to the second-fill used for the Single Malt.

On the nose the Single Malt is light and grassy, perhaps straw, with undertones of caramel, honey, pineapple, green plum, apple, orange, pine sap, juniper, rose, sandalwood, cereal and metal. In comparison the Young Malt is heavier and sweeter, with notes of banana, oatmeal and meat.

The palate is dry and textural, eschewing the heavy, sharp, sweet, alcoholy, bourbony feel of the Young Malt for a much lighter, zingier sensation. The undertone is of oaky wood dust, almonds, walnuts and burnt orange, while the finish is sharp, hot and bitter, coating right across the back of the tongue and lingering for some time.

The differences between the Young Malt and the Single Malt are intriguing as the latter is a definite evolution of the former. Compared to the heavy, ham-fisted virgin oak-driven flavours of the Young Malt, the Single Malt is a much lighter, zestier affair. It’s interesting how a second filling of the same barrel with the same spirit can produce such different results.

Still, the balance of the Single Malt is perhaps a little off, with the nose needing some extra depth and the mouth, particularly the finish, needing some rounding out. It’s definitely better than the Young Malt (and both are miles above the undrinkable Young Malt Sheep Dung Smoked edition), but as I have commented before and will reiterate now, I am curious to see what effect some extra aging time would have on the Flóki.

Nitpicking aside though, this is a worthy first attempt from Eimverk and I think Hrafna-Flóki himself would have had a much more favourable opinion of the place if he had had a few bottles of his namesake whisky to keep him company through that first winter.