“Sorry I’m a bit late!” exclaims Jane as she sweeps into Sawford Distillery, “The kids have just had their nap and are now at the park with my sister.”
“Everything revolves around nap time these days” laughs husband and head distiller Mark, chipping in on the conversation as he checks the stills.

Family is core to everything at Sawford Distillery, but that idea isn’t just limited to blood relatives. It also extends to the relationships and community that Mark and Jane Sawford want to create around their distillery. 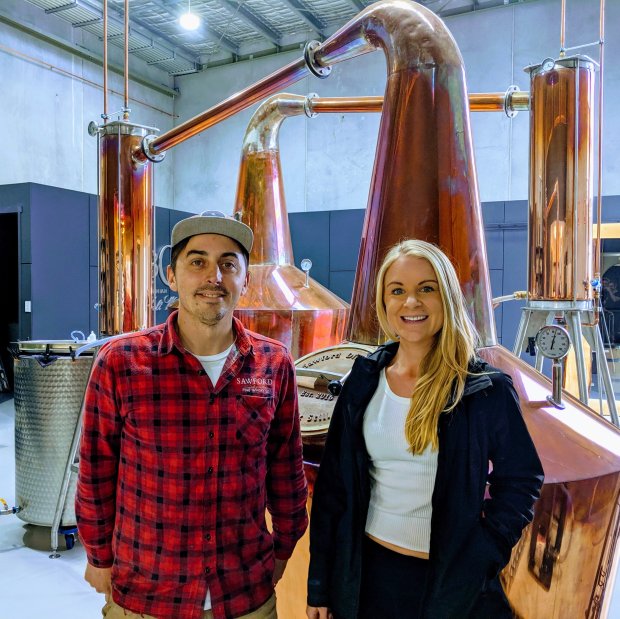 Mark and Jane Sawford relaxing in front of their shiny stills

Jane herself is the scion of a famous Tasmanian whisky family. Most people would know her as Jane Overeem, the daughter of one of the founding fathers of the modern scene, Casey Overeem. During Whisky Waffle’s recent visit to Sawford, we are immediately struck by that rich sense of heritage and connection as soon as we enter the bond store.

Sporting something of a Cold War chic (one can imagine secret agents hurrying through, clutching top-secret counter-espionage dossiers), the bond store has an important place in Tasmanian whisky history: “This was originally Bill Lark’s back in the very early days,” Jane tells us, “But after he left, my dad was quick to snap it up. This room is where we used to bottle the Overeem. Mum used to do the bottling, Dad did the labelling and I did the packing. Then I had to take the boxes down to the local post office to send off. It was all part of building the Overeem brand!”

While the bench may still be covered in Overeem bottles, these days all the barrels in the next room are filled with Sawford spirit, meaning that one day in the near future it might be Jane’s kids helping to pack their own namesake whisky. That day is still a little way off though as, unlike a lot of Tassie distilleries, the Sawfords are taking the slow approach.

“This place is quite cool and has a very stable climate, allowing for a much longer, gentler maturation” comments Mark as he clambers up onto the top of the racks to thieve some whisky.
“Dad always said that he wanted his spirit to taste like whisky and not oak,” adds Jane, “And we’ve really taken that on board. That’s why we’re mostly using l00L-plus barrels and playing the long game to get the best out of the spirit.” 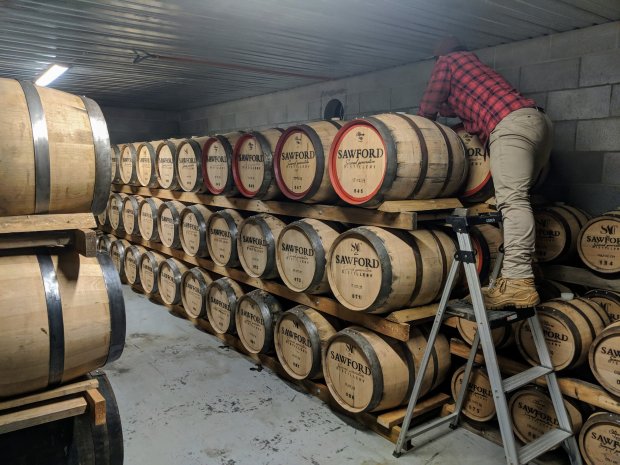 While we’re down in the bond store, Mark and Jane are kind enough to share some of the fruits of their labour with us (when in Rome, eh?). Mark taps barrel #002, a 100l port cask that’s been down for about 2.5yrs (#001 is off limits as it’s been “getting sampled a bit too often”) and it’s good. Like, really good. Unfortunately we get a bit distracted drinking the whisky and forget to write down any tasting notes, but I remember thinking at the time that if this stuff is cracking after only 2.5yrs, imagine what it’s going to be like on its release around 2022.

Back when Mark and Jane were first toying with the idea of starting their own distillery, there was some resistance from a surprising source, with Jane revealing “Dad strongly encouraged us to put up a solid business plan first, as it’s very expensive – and a long time before you see any return. But we worked through it all, and now he’s very supportive and excited for us!”

Mark has been grateful for the support and whisky making know-how of his father-in-law, having come into the Overeem family past-time as an outsider. “When Jane and I first got together Casey kept an eye on me, as prospective father-in-laws do. But we get along really well, we like to have a beer together. Casey mentored me when we started Sawford. He was there to help me in the first few months and then slowly stepped back as I started to get a good grip on things.”

Mark’s own background is in hospitality, with several properties in the Kingston Beach area, but these days he spends a lot of his time running the stills at his distillery. “The reason I can spend five days a week here at the same time as running three businesses is because I have a good team around me.” Putting in that effort means that Mark is currently able to coax around 40 000L of spirit a year out of the stills and after 2.5 years, already has a couple-of-hundred barrels down. “I don’t want to have the same problem as Casey did back in the day and be saying ‘I wish I put down more spirit down’.”

Back out on the distillery floor, the digs are modern and airy, sharing a wall with the White Label contract distillery, which Sawford helps source barrels for and for which Jane is the sales manager. Taking pride of place on the Sawford side are the Knapp Lewer-built 1800L wash still and 800L spirit still, inspired by the original Overeem stills. “We’re very sensory with our cuts,” comments Mark, “I’m always trying to improve instead of just going through the motions.”

Mark getting ‘sensory’ with the cuts

The stills themselves are brightly burnished, almost purple, and rippling with a rainbow sheen; keen Instagram followers will know that this gleam is the result of a ‘family still polishing day’ a few months ago. “We like to think that the way we present our stills and our distillery is a representation of who we are,” Mark tells us proudly as we gaze at our reflections.

Another representation of who Mark and Jane are is the large silver monogram adorning the back wall in the distillery. According to Jane, ‘S&O’ (Mark Sawford & Jane Overeem) stands as a symbol for “who we are as a couple – two families coming together to make something beautiful.”

Being based in the ‘romantic’ Huntingfield industrial estate means that Sawford is unlikely to pick up any location awards, but Mark isn’t fazed: “We didn’t want to go down the location bent, we want to celebrate the people instead. We wanted our brand to be real, not to pretend that we’re something that we’re not. What we really value is building relationships.”

Jane backs him up on that idea all the way: “Back in the day we had to go knocking on everyone’s doors to try to sell the Overeem and convince them to take a chance on Tassie whisky. We’re going to have to go through all that again with Sawford, not necessarily because people need convincing these days, but because we want to build that personal relationship up with all the bars and businesses and the community. Having those connections with people is something that is really important to us.”

“Oops, sorry guys, I’ve got to go, the kids need picking up!” exclaims Jane apologetically as she hurries out the door again. Our time is up as well as we have an appointment to keep on the other side of the wall, so we say our goodbyes to Mark and ride off into the sunset (aka, around the corner to White Label).

You know, despite their hectic lives, the Sawfords really do walk the talk and go out of their way to make you feel like part of the community that they’re trying to build. Which is lucky, because at a time when the Tassie whisky industry feels like it’s growing by the minute and the big sharks are starting to circle, hopefully it’s people like Mark and Jane who will ensure that we never lose that sense of family.