Throw away your soft-caps, pipes and tweed vests, it’s time to bring whisky out of the dusty gentlemen’s clubs and into the open where it belongs. Whisky is unique in that it’s both an ancient and emergent industry at the same time. Old recipes hold their timeless elegance and modern distillers are creating experimental creations: between them there is a flavour for everyone.

Increasingly more young people are keen to get into the whisky scene. They either know what they like and are excited to try more, or they are new to the drink and want some guidance. Either way, they often don’t want to attend tastings full of middle-aged people with years of knowledge, and they often don’t speak up when they think they have guessed a flavour or a smell.

This is a great loss, and I want to change that.

That is why I started the Young Whisky Enthusiasts, to encourage interested people to get more involved. The tastings have been small but due to the support they have received, we are moving venues and getting bigger. Through the generous in-kind support of the Lark Distillery, we are saying farewell to small tastings and welcoming bigger and better things. 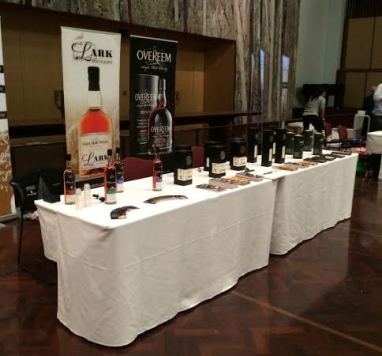 Mooresy: “there is lots of whisky in this photo”

The first of our tastings at the new venue will be held at 7:30 PM on 5 November 2014 at the Lark Cellar Door in Hobart. There will be rare and expensive whiskies on the tasting table, so contact me (0417 382 542, alexandermoores@gmail.com, or on Facebook) to secure your ticket. Price is $30 and includes at least 5 special drams.

At this first distillery tasting we will do a world tour of whisky taking in many countries and flavours, as well as voting on the name of our group and doing a people’s choice award which will help shape the next tasting.

It’s your community too, so get involved and help us forge a future for young whisky enthusiasts.