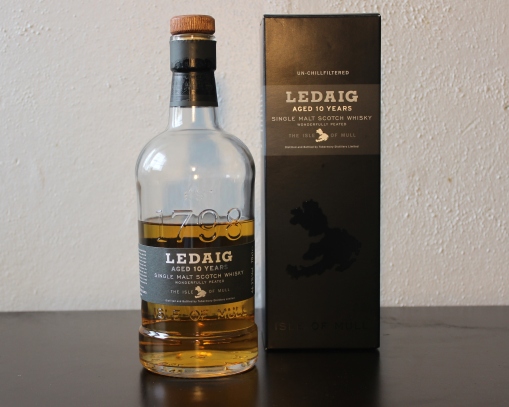 My Whisky Waffle co-conspirator and bestie Nick was kind enough to give me a bottle of the water of life for my birthday (what else?). We cracked it open that night and had a few cheeky drams. I’ve been mulling it over ever since, a rather appropriate course of action seeing as the bottle in question was a Ledaig 10 year old, which is produced by Tobermory Distillery on the Isle of Mull (Haha! Geddit? Isle of Mu… Why are you all groaning?… Ok, I’m just gonna sit quietly over here).

The Isle of Mull is part of the Scottish whisky zone known as the ‘Islands’, a bunch of distillery inhabited land masses surrounded by water and huddled off the Scottish coast, whose seemingly defining feature is that they aren’t Islay. Impressively, Tobermory Distillery is the chief abode for the islanders (or Mullets as they are known locally), a ramshackle stronghold built from driftwood, shipwrecked fishing boats, kelp and the occasional escaped haggis… Oh, wait, sorry, the distillery is actually named after the main town on the island, Tobermory, and is probably constructed of far more traditional materials (not sure about the Mullet thing either. I hope it’s true).

The Ledaig 10 year old takes its name from the original distillery built on the island in 1798. Contrary to popular belief (i.e. mine), it is not matured in the sporrans of the Mullets, but instead in the far more superior oak barrel. Typical of the drams from that part of the world, the Ledaig is peated, but it is a very different smoke to the Ileach drops (Remember, ‘Islands’ = ‘Not Islay’).

On the nose the Ledaig is dark and intense, with quite a distinctly meaty quality to it. It’s sort of like a combination of smoked ham and marinated meat sizzling over hot coals. That marinade has a great oozing sweetness combined with pepper, sea salt and perhaps… plum?

On the mouth you are hit straight up by a big swirl of smoke, followed by a robust spicyness from the 46.3% alcohol. After that a lovely butterscotchy sweetness slides over the back of the tongue, served up with caramelised pears and another dose of that woody smoke. Surprisingly the Ledaig is much smoother than you may expect from its 10 years, but the combination of the smoke and the higher alcohol means that there’s still heaps of craggy, earthy character to be had. It’s certainly not a beginners drink, and probably requires a bit more practise to enjoy the full effect.

Growing up in the only distillery on a windswept island off the Atlantic coast of Scotland has certainly given the Ledaig a character all of its own. Perhaps some of that black humour it displays comes from the dark waters of the mountain lochs on Mull used in its creation. If you’re looking to give someone a strong, rugged, sexy islander who’s been out fighting fires on mountains in only his kilt for their birthday, then the Ledaig’s your man (I’m sure that’s what Nick was aiming for). There’s no need to mull it over too long.