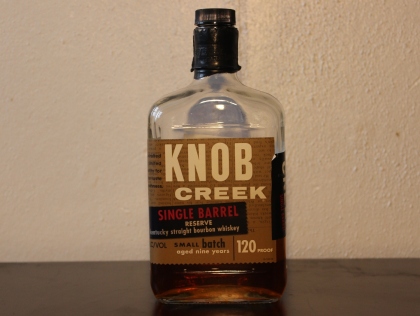 We at Whisky Waffle pride ourselves on our light-hearted, satirical and occasionally even entertaining take on whisky. So when sitting down to review a bottle entitled ‘Knob Creek’… well, it’s almost a little too easy. So I did my best to refrain from the obvious jokes on this topic and tried to keep things above the belt. But this task proved to be a bit of a hard one…

Knob Creek comes in many varieties, but mine is clearly the biggest: 60% ABV, or as they say in America, 120 proof. They also make a 100 proof and a rye, but this is the one that really sticks out. It is named for the area of Kentucky where Abraham Lincoln (AKA guest reviewer Stretch) grew up. It is said that the creek nearly claimed his life as a boy while swimming (Lincoln that is, not Stretch), coining the phrase ‘dead as a doorknob creek’.

Knob Creek is part of the Jim Beam toolbox, and forms a quarter of their small batch range alongside Bakers, Bookers and Basil Hayden. Unlike the other three, Knob Creek doesn’t start with a B. It is also aged for a period of nine years, which as we have learned is a long time for American whiskey (though a blink of an eye for the Scottish stuff). Nine years seems to be a good decision from the Knob Creek crew, as the finished product is quite the package. 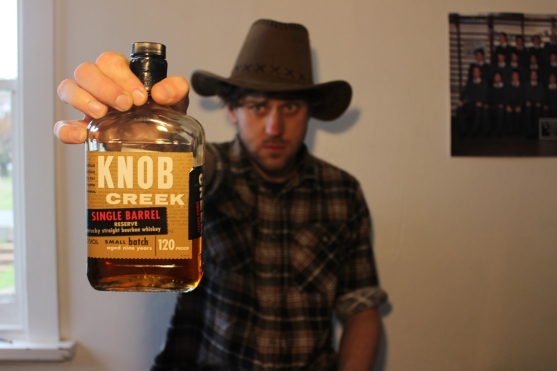 Alongside the usual bourbon notes of caramel, honey and vanilla the Knob Creek also contains scents of stewed apricot, cinnamon and candied pop-corn, although surprisingly there is no trace of banana. It’s a nose with some power, though the first sip is even stronger. The warmth from the alcohol is immediately noticeable: this is a whiskey that is seriously ballsy. Flavours of golden syrup, cashews, pepper and multigrain bread flood the palate and are followed by a bucket load of spice which truly throbs across the tongue. The finish is surprisingly easygoing, without being inconsequential or flaccid. It lingers gently with notes of vanilla, apple… and of course a whole lot of wood. 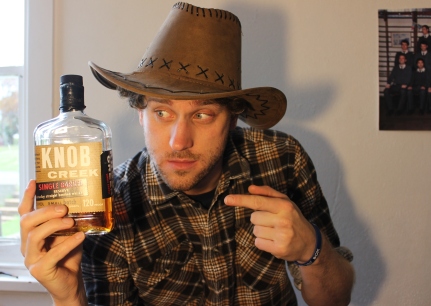 Knob Creek claim to be the ‘number one super-premium bourbon in the world’. While I am not entirely sure what the term ‘super-premium’ means, I am not unhappy with this claim. This is a bourbon to sip and to savour. It is not a whiskey I would always have in my pocket, but one that I would always be pleased to see.