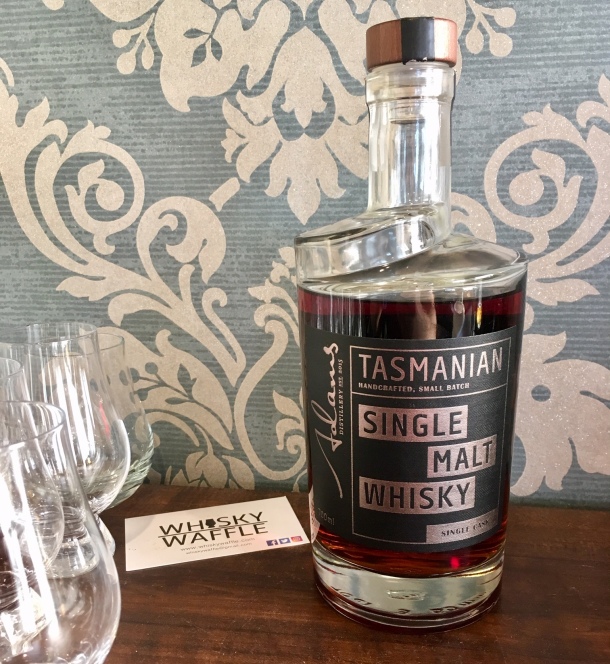 What is the most important aspect of a whisky?

a) The region it hails from;

b) The age statement;

c) The prettiness of the bottle; or

While there’s a lot to like in options a) to c) (I’m a sucker for a pretty bottle!), when it comes down to it, the best thing about whisky is that you can drink it and therefore flavour is by far the most important factor.

Which is what the Adams of Adams Distillery had in mind when trying to squeeze every last tasty morsel out of cask AD0086, a French oak ex-pinot noir barrel. But before we get to option d), let us discuss a) to c).

Adams Distillery is based in the North of Tasmania at Glen Ireh Estate in Perth, just outside Launceston. They’ve been expanding the distillery since… well, pretty much since day 1, and the first few of their releases are only just entering the market.

This whisky is in no way old – by Scottish standards at least – but the smaller casking and hotter conditions in Tasmania require an earlier release. To maximise the flavour in each bottle the Adams developed the ‘slosh-cask’ technique, which simply involves regularly rolling the barrel from one side of the bond store to the other – the idea being that the process encourages greater interaction with the wood of the cask, forcing more of the barrel influence into the spirit.

The bottle is particularly pretty as well and is sure to stand out on bars with its distinctly-shaped neck. However, the most beautiful aspect is the colour of the whisky itself: a rich brown which when held up to the light glows ruby red.

It is an appropriate colour when you consider the creation of the dram. Unlike most whisky-makers in Tasmania who stick to a fairly standard grain (usually pilsner malt), Adams has experimented with using a percentage of dark crystal malt in their mash. It could be the power of suggestion… but I can’t help but feel it imparts coffee notes throughout the dram’s flavour.

On the nose there is oodles of chocolate, vanilla and stewed fruits, alongside hints of green grapes. It’s all coated in a thick layer of toffee which continues onto the palate, and is vibrant and viscous, almost chewy. There are also notes of strawberries and chocolate orange, while the finish contains strong coffee fudge flavours. For my fellow North West Coast Tasmanians, Anvers do one that this strongly reminds me of.

This whisky is not subtle – not even a little. But that’s not the point of the dram. The Adams have put flavour first and this is the result. It couldn’t be described as easy drinking and does take some taming. But like a whisky-swilling St George, I’m happy to take on this dragon. It’s exciting and moreish and most importantly of all, something a little different for Tasmanian whisky.