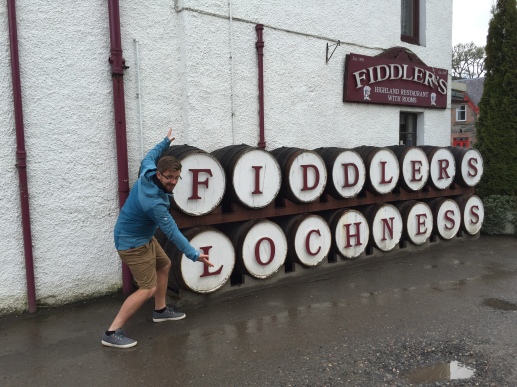 The village of Drumnadrochit, nestled on the shores of Scotland’s Loch Ness, is more usually know for being the hub of all things Loch Ness Monster related (and home to Aidrian Shine’s beard).

For the wandering whisky fan however, there is a beast of another kind lurking in Drumnadrochit, one that is full of golden fire.

Fiddler’s Bar, owned by the delightful Jon and Karen Beach, is a wondrous whisky paradise. A hint is given by the row of maroon and white capped barrels resting outside to the the real treasure hiding within.

Inside the cosy bar room are dark wood shelves lined with what seems to be every dram under the sun. Common malts rub shoulders with rare drams, and foreign drops mingle happily with the locals.

Scottish distilleries encircle the space above the bar, ordered very helpfully from A-Z (although this doesn’t necessarily make the choice any easier). I was lucky enough to sample a William Cadenhead that allegedly contained 40yo Glenfarclas, a very refined and elegant drop.

M’colleague will wholeheartedly endorse my opinion that Fiddlers is a truly fine place to be, having found comfort within its warmth during a time of need and restoration in what he tells me was a truly remarkable glass of Port Ellen.

If you ever find yourself passing through Drumnadrochit and want to discover an authentic experience among the tourist holy-poly drawn by Nessie, then Fiddler’s Bar is the place to be. 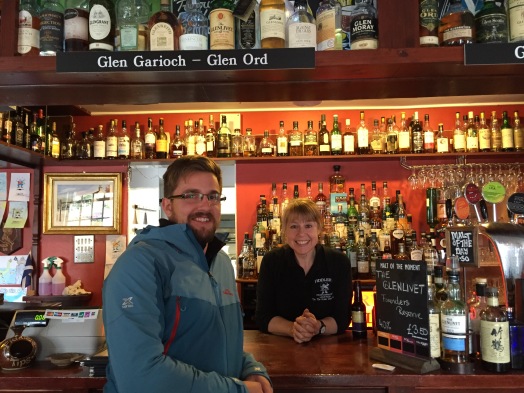 (Try the Mighty Burger if you’re there at lunch. It really is!)

As Tasmanians we tend to think that our locally produced whisky is rather great. Unfortunately, the opportunity to taste a good assortment of the state’s bottlings is fairly hard to come by, unless you happen to have really deep pockets or are friends with Jeff Kennett. Hold on, so why not open some kind of boutique store in a beautiful location, stocking a comprehensive range of Tasmania’s finest drams for people to sample at their leisure? Luckily, that is exactly what an enterprising ex-expat couple has done.

Two Wafflers off with the angels

Louise Payne and Sam Humphries grew up in North West Tasmania but left the state to pursue the highlife in Sydney. But you know what they say: a change is as good as a holiday, and the couple swapped the nations’ largest city for a popular holiday destination: moving into an old bank building in the picturesque town of Stanley. Initially unsure of how to utilise their time, they saw an opportunity in the fledgling Tasmanian whisky market and seized it. Sam, member of local band ‘Charlie Don’t Surf’, described this business venture as: “riding the crest of a wave”.

Today the couple have transformed their old bank into a whisky drinking nirvana called ‘The Angel’s Share’, even converting the bank’s old safe into a whisky vault. As Stanley is only an hour’s drive from their hometown, the Whisky Waffle boys decided to pay Louise and Sam a visit – and sample a portion of their amazing range. Neither Waffler wanted to be designated driver, so they booked a cottage within stumbling distance of their destination. The only question when faced with an entire wall of Tasmanian whisky was: where to start?

We decided to right a wrong and sample the wares of a distillery we had scarcely tried before: Belgrove. The creations of Tasmania’s mad scientist of whisky, Pete Bignell, were whiskies like we’d never tasted before and we were grateful for the opportunity to sample them. We then moved onto Nant, investigating some of their vatted malts: the Homestead and the Old Mill. After some musing we decided that, while pleasant, we preferred their cask-specific releases better.

What would a tasting of Tasmanian whisky be without Lark? We had a cask-strength face-off between the port and sherry-barrelled releases, which remained unresolved as Nick preferred the former while Ted the latter. Our languorous afternoon of whisky tasting concluded with the heavy hitting Heartwood. We’ve rarely seen such a range of Heartwood expressions – if you’re interested in trying Tim Duckett’s colossal creations, then this is the place to come. We tried the Devil in the Detail – Heartwood’s strongest release yet at a whopping 73.5% – and the Good Convict – a gorgeous Sullivans Cove-distilled number which we decided was probably the pick of the day.

If you are curious to find out what Tasmanian whisky is all about, but you are unsure of what to purchase – or even where to start – then a trip to the Angels Share is a dram good idea. It gives you the rare opportunity of try before you buy thus avoiding spending large sums of money on whisky you don’t necessarily enjoy. The Tasmanian whisky industry and the bar have a symbiotic relationship: Louise and Sam will happily point you in the direction of distilleries you like, but the friendly atmosphere, stunning surrounds and of course the whisky itself will keep bringing you back to spend another lazy afternoon in the beautiful town of Stanley at the Angels Share.