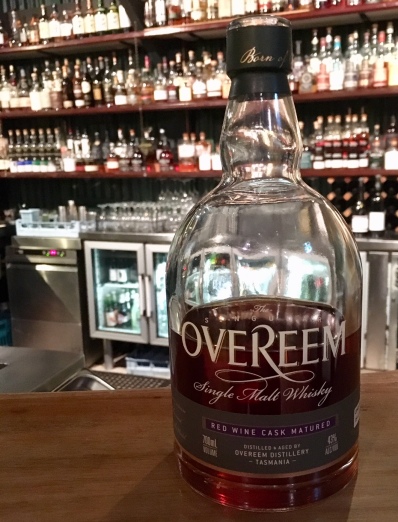 Just when you think you know someone… they go and do this!

I love Overeem. It’s one of my favourite Tassie drops and one I would recommend to anyone trying Tasmanian whisky for the first time (especially the cask strength port cask – phwoar!). The thing is you see, over the years (and multiple tastings) I had come to know what to expect from each Overeem release: a hit of spice and oranges followed by oozing caramel – basically, whisky deliciousness. So upon discovering barrel OHD100 – Old Hobart Distillery’s hundredth cask filled – was fully matured in red wine casks, I expected a grapey take on a familiar flavour. And I could not have been more wrong.

“What is going on here?” I do believe I remarked to m’colleague Ted as I brought this within range of my nostrils. It was a big meaty nose with strawberries and cherries taking centre stage alongside leafy, forresty notes. My best description is simply: intriguing.

And the palate? Well it’s definitely a wine cask. I’m up and down with such maturation and this bottle showcases the good with the bad. It brings to mind mulled wine with oodles of cinnamon and orange notes but competing for space in the mix are sour vinegary elements. And it’s dry – man it’s dry! Oaky oaky tannins leave you with the impression you’ve been sucking on the armrest of an old rocking chair. The finish is long and a little sweet with flavours of black current and aniseed.

This whisky is in no way rough – though at the same time it’s not easy to drink. Its time in a little red wine barrel has smoothed off the coarse edges and packed it with flavour, flavour and more flavour. While the flavours may not always go perfectly together – think of a meal of Atlantic salmon, marshmallows and vegemite – it’s a fascinating mix. This is a whisky that needs talking about as much as it needs drinking! And Whisky Waffle are only too happy to oblige…