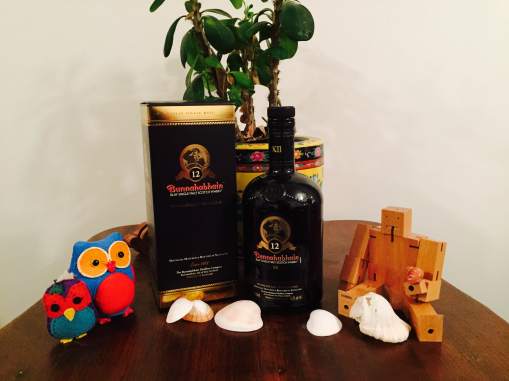 The world of whisky is a lexicological minefield, populated by distilleries and bottlings with all manner of weird and wonderful names. The birthplace of whisky in particular likes to play mind games with the innocent, wide-eyed bystander, the Scottish tongue bending words in ways you just wouldn’t expect.

A true prince of the pack is a distillery from Islay with a name that causes the unprepared mind to melt at the sight of it. Gather your wits dear reader and say hello to Bunnahabhain (phew!). Right, so just to be clear, that’s BOO-na-HAVen (but to really get it, here’s a helping hand from Brian Cox).

The Bunna, as it is more colloquially known, is one of the oldest distilleries on Islay, producing drams since 1881 in the village of the same name. Naturally, being from Islay means that Bunna drams are peated. Unlike other distilleries on the island, however, they aim for a far more subtle maritime nature, with the Bunna motto being ‘the gentle taste of Islay’.

Encased within a heavy black glass bottle emblazoned with the sailor logo and the Roman numerals XII (a numbering system used for their aged releases), the Bunnahabhain 12yo is the core release of the distillery. Made with water from the Margadale spring and bottled at that sweet spot of 46.3%, the 12yo brings forth a rich golden hue.

On the nose the 12yo is light, smooth, sweet and fruity, with ripe autumn apples, dates, plum jam, red grapes and raisins from the ex-sherry casking. Mixed in with the fruits are chestnuts, cashews, pistachios, dark chocolate, brine and rich oak. A veritable cornucopia indeed.

On the palate the liquid hits sharp, salty and dry, like taking a mouthful of seawater on a summertime dip. Underneath sits salted caramel, ginger, mixed peel, seaweed and a faint hint of driftwood smoke. The finish is again salty, and lingers on the tongue like the end of a day at the seaside, a mixture of brine, sweat and sunscreen.

Bunnahabhain is certainly not one of the Ileach peat monsters, choosing to keep that beast well chained in its cave. Instead it manages to sing an incredible song of its maritime environment, perfectly capturing the salt laden winds that blow in from the stormy Scottish coastal waters. The Bunnahabhain is indeed a whisky that is as complex in its nature as it is in its name.