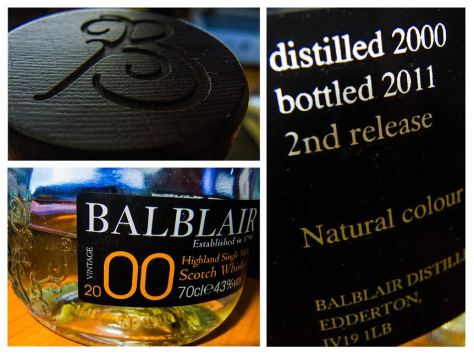 Up until I had the bottle in my hands, I’d not heard a lot about Balblair Distillery, and as you do, did a bit of research in to it…

Balblair has one of the oldest archives in distilling, with the first ledger entry dated 25 January 1800. John Ross himself penned that first entry, which read: “Sale to David Kirkcaldy at Ardmore, one gallon of whisky at £1.8.0d”. Ahhhhh, the good old days when you could get a gallon of whisky for under 2 quid…

The distillery is owned by Inver House Distillers Limited, whose other distilleries include one of my favourites, the Old Pulteney Distillery as well as Balmenach Distillery.

The Balblair distillery is unusual in the use of vintage dates rather than age statements. This means that Master distiller Stuart Harvey has more flexibility with its offerings and it provides the drinker with a ‘snapshot’ of that moment in time rather than a stationary age statement.
So, enough rambling – on with the review – so, this one I have in my hand is:

Palate: Beautiful malty palate with straight up vanilla & coconut, hints of honey & toffee apple and coconut. Nicely balanced with a lovely mouthfeel. Let it sit for a while, you’ll get tinned pears, vanilla ice cream. This is a great whisky – super drinkable (just ask Mooresey!)

Finish: long! With vanilla and some dry oaky wood

I found it did not need water… (I tried adding some, and while the nose picks up some more floral notes, the body & character drops away, and the whisky becomes way too soft and mellow)

All in all, a delicious whisky… one that I have gone back to many times now! (perhaps too many times by the looks of the bottle!) Rumour has it they have made a similar whisky but used Sherry Barrels instead of Bourbon… perhaps I shall try and track it down, and see how it compares, but that’s a story for another day…

Posted by Nick and Ted

If you haven’t worked it out already, we’re not shy to talk about our pride in the fledgling whisky industry in our home state of Tasmania. Currently there are nine operating distilleries and as whisky writers, it is our duty-bound quest to visit each and every one of them.

This quest begins with a distillery so new that we left without even tasting a single drop of their whisky… the reason being that it is currently in oak barrels and will not be ready for the best part of a year!

The distillery in question is of course Redlands Estate, Tasmania’s ninth distillery. As we approached the estate, the elm-lined drive provided glimpses of the red bricks of the 19th century heritage farm buildings. Constructed using thousands of bricks made on-site by convicts, the estate summons up a picture of old world rustic charm.

Vintage beauty… and some old buildings, too.

Redlands Estate was originally founded as an innovative farming complex, the fields fed by the waters of the Plenty River, which was diverted into a system of canals throughout the property, devised by the very Tasmanian sounding Count Strzelecki. Over the years the estate served many purposes such a hop farm, a dairy, and a granary, before falling into disrepair in the late 20th century.

Fast-forward to 2008 when the new owner, agricultural consultant Peter Hope, was contemplating the future of the property. During a lunch with the godfather of Tasmanian whisky, the great Bill Lark, the idea of creating a distillery on the site was formed. However, this was to be no ordinary distillery: the ambitious minds of Peter and Bill envisaged an establishment that would become Tasmania’s, and possibly the world’s, first true paddock to bottle distillery.

Redlands Estate is perfectly suited to this brief: fertile fields for growing barley, pure water from the Styx Valley flowing down the Plenty River, and striking buildings for housing malting floors, stills, and aging barrels. Bringing these elements together is head distiller Dean Jackson, with whom we had the genuine pleasure of spending an enjoyable afternoon.

Nick pretending to look at the scenery.

We began our tour with a walk around the grounds, taking in the historic buildings, the Plenty river (Dean was keen to get the “there’s plenty of water” joke out of the way early) and the barley fields. The newly emerging shoots were of the Gardener variety, a brewer’s barley rich in oils and flavours. After harvest in late summer, the barley is steeped in an old water trough left over from the estate’s time as a dairy.

When Dean decides the barley is ready, he transfers it to the malting floor. In his own words: “gumboots on, spade in hand, shovel through window”. The malting room is an ex-granary and shearing shed, and due to the lack of underfloor heating, can only be used in the warmer months. Dean then hand turns the grain three times a day for a week until germination reaches the optimal point. After that, it’s into the purpose-built kiln, a large rotating stainless-steel drum, contrasting wildly with the brick chimneys and pagodas found in Scotland.

We wandered back inside to the room which houses the mash tun, the wash back and the solitary still, and embarked on a discussion about the flavours imparted in the earliest stages of the creation of the spirit. Different temperatures in the mash tun create different sugar types: lower temperatures can create honey and floral notes, whereas higher temperatures induce brown sugar and molasses flavours. Too hot, and less pleasant notes can emerge. Dean references this as a crucial process: “Stuff it up and you’ll get bad spirit”.

We were lucky enough to sample some of the wash straight from the wash back: Ted described it as sweet unhopped homebrew, while Nick claimed it was better than actual beer. Next we tried some new make spirit from only the 26th distillation completed at Redlands. In the absence of a single malt, we thought we would provide some tasting notes for the new make:

Rather unsurprisingly, this spirit was very clear in appearance and had high alcohol on the nose. Once we finished congratulating ourselves on this line, we did discover some other flavours, such as floral and oily notes, with a whiff of match smoke. Rich across the palate with hints of almonds and plums. 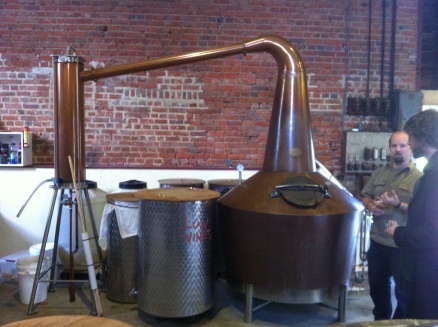 We were then offered the chance to visit the maturation room housing all 42 barrels laid down by Dean to date. Unfortunately we cannot reveal the location of this fabled room, as we were forced to swear on our miserable lives to keep the location secret before being allowed in (blindfolds and top-secret rituals may or may not have been involved too).

Once inside, our noses were immediately greeted with the glorious scent of potential whisky. Dean told us to inhale as much as we could whilst there, to ensure the angels didn’t get too much (greedy sods).

The mission of Redlands Estate is to create a purely Tasmanian whisky, so you won’t find any ex-bourbon or European sherry barrels lying around. Instead, Redlands matures its spirit start-to-finish in ex-Pinot Noir casks sourced from three southern Tasmanian wineries. This is a departure from not just traditional Scotch whisky, but also from fellow Tasmanian distilleries. What effect this will have on the finished product we can only guess at, but Dean tells us that it’s shaping up as something very special.

The newest barrel: number 42. The water of life within the meaning of life.

Our tour concluded with some tastings, not of whisky, but of three apple based products crafted by Dean. It was here that we received an insight into his tasting philosophy:

“All the flavours are already in your head from a young age. Practise gives the ability to draw them out and differentiate between them. The flavours that you discover come from your own life experiences, and will vary from person to person.”

Redlands presents itself as a rustic, idyllic, countryside establishment which provides a true all-encompassing Tasmanian experience. While for some businesses this image would be merely a façade, a means to an end, we were pleased to discover that this was not the case at all; it is every bit as genuine as it claims to be. The ethos of Redlands is shown in the dedication, passion and care taken in every aspect of the whisky making process. We believe that these elements will be expressed in the Redlands single malt when it is finally released, and we will be excited to sample this unique Tasmanian whisky.