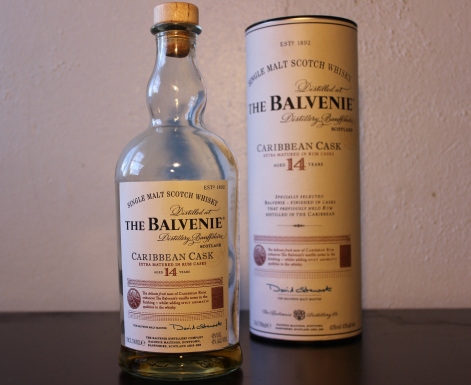 The Caribbean. What does it make you think of? Beaches? Palm trees? Sunshine? Johnny Depp movies?

The flavour of the Balvenie 14 Year Old Caribbean Cask certainly shows the power of suggestion because I can’t help but noticing this whisky tastes rather… tropical!

Balvenie are one of the leaders in Scotland for maturing their spirit in multiple barrels, often, as is the case with the Caribbean cask, for only the final few months of the aging process. This imparts another layer of flavour on the whisky without removing characteristics that are already present. Often this ‘finishing’ process is conducted in sherry or even port casks. In the case of this Balvenie however, it spends its final few months of aging in ex-West Indian rum barrels, hence the moniker: Caribbean Cask.

The rum influence certainly adds a new dimension to the whisky. The overriding flavour in the nose is, would you believe it, bananas; and I’m not just saying this because of the Caribbean image in my head. Honestly! There are also the vanilla and honey notes expected of a Speyside whisky, however these couple with fresh floral scents. It’s sweet and light, but pleasingly complex.

On the palate the mouth feel is thick and syrupy with malty, biscuity notes present. However, these rapidly give way to fruits such as pineapple, passionfruit, mango and yet more banana. Tropical fruits! The finish is gentle and sweet, with more traditional honeycomb and toffee.

Whether or not I would have picked out these tasting notes if this whisky had been given a less suggestive name is an interesting point. However, as far as this dram is concerned, the marketing and the flavour go hand in hand. The image that ‘Caribbean Cask’ conjures in my head is now inseparable from the whisky itself and I can only describe it in one way: this is the tropical punch of whisky!