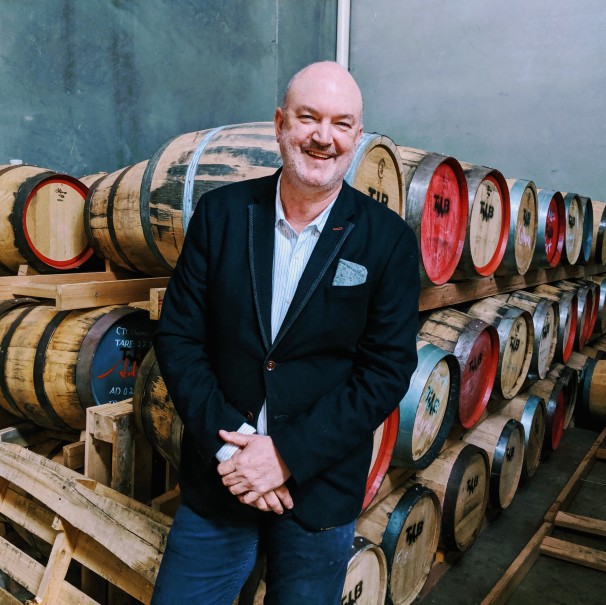 Heartwood is the creation of the Tasmanian whisky industry’s very own mad scientist: Tim Duckett. Tim has produced his remarkable whisky alongside his day job as an environmental consultant, deciding to dip his toe into the infant Tasmanian whisky scene after meeting Bill Lark in the late nineties. He purchased his first barrel of Lark spirit in 1999, but cannily didn’t rush it out the door before it was ready. The first bottling, Mt Wellington, was released in 2012 and things escalated rather quickly from there.

While there are other independent bottlers in Australia, including TIB, Tim’s other project, there is nothing on earth quite like Heartwood. Regularly bottled at unheard of ABVs, some of which nudge the mid 70% range, each release is limited to several hundred bottles, meaning it sells like hotcakes and has developed somewhat of a cult following. 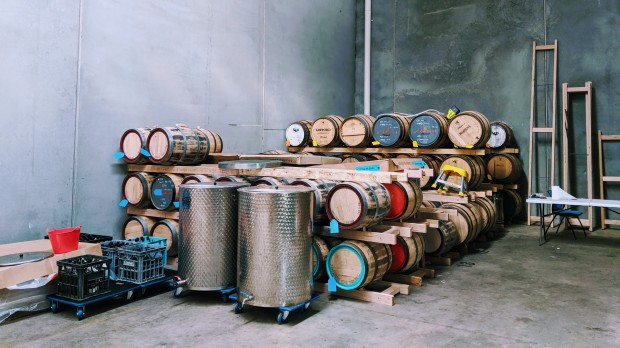 We visited Tim at Heartwood’s Blackmans Bay bond store where he gave us a peek behind the curtain at the type of flavour profile he values: that which pleases the palate – specifically his palate. Tim seeks to create whiskies which are thick, flavourful and with a finish as long as any whisky on the planet. How does he do this? By pairing good quality spirit with good quality barrels.

It sounds simple, but it is actually far from it; consistently creating high quality whisky is not just the passive process of sticking spirit into barrels and waiting. Tim employs all manner of tricks to get the most out of his whisky, as we found out during our visit. These include intricate blending, either whole casks or simply a few litres here or there, deciding when the oak influence is done and decanting it into vats before beating it with a paddle to drive off volatiles, as well as moving spirit into a warm office to “syrup up”.

When we visited Heartwood HQ the north-facing wall had a number of nearly-ready casks sitting up against it, which Tim explained was the “finishing wall”. He also confessed that he refuses to reuse casks 100 litres or larger unless they have been repurposed with Heartwood witchcraft, and even then, he will only use peated spirit in them… and this is just the tip of the iceberg of strategies Tim uses to create some of the most impressive and sought-after whisky Tasmania has to offer.

Of course, it helps when there is no agenda to meet; no shareholders to appease. Despite its fame, Heartwood is small-scale, a project born out of passion. Therefore, the whisky is released only when it’s truly ready and never to meet a specific profile or timeframe. Age is somewhat irrelevant in Tasmania anyway, with our varied weather conditions and small barrels. Tim claims that the age of 20 litre casks should be measured in seasons, not years, as the Australian summer will age a whisky faster than autumn, winter and spring combined.

During our visit we were lucky to try a few impressive Heartwood and TIB drams which were nearing completion, including spirit distilled at Redlands, Adams and a ‘Renowned New South Wales Distillery’. Most spectacularly, however, we were able to sample the first Heartwood/Belgrove collaboration (which at the date of publication has just been released – and sold out within hours). The ‘Heartgrove’ was a clash of the titans: a coming together of earthy, almost smoky rye notes with a thick fruit layer from the muscat and sherry casks it had been matured in. It was a wild beast, but Tim had tamed it, creating an intriguing rye that went down almost too easily for a 55% drop. If pressed we would have probably claimed it as our favourite, though it certainly faced some stiff competition.

Fascinatingly, none of the drams we tried tasted the same; they weren’t even in the same ballpark. The only thing that linked them was the fact that each one was delicious. As Tim told us, Heartwood has never claimed to produce a consistent flavour profile. Instead he focuses on producing consistently great whisky – and so far he’s achieved it every time.

Heartwood is not only unique among Tasmanian whisky producers: there is nothing on the entire planet quite like it. By refusing to release anything below his expected standard, Tim has ensured a whisky-legacy that will live on even when the last of the Heartwood barrels is empty.