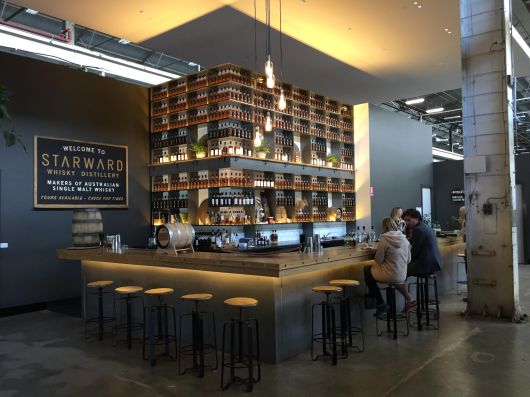 They grow up so fast, don’t they? It was under two years ago that Whisky Waffle first visited New World Distillery/Starward in their Essendon Airport location and were impressed by their hardworking staff and their delicious whisky. Fast forward to the present and they’ve raised the bar considerably, upsizing their apparently insufficient aeroplane hangar for a gigantic warehouse, which in turn will likely be bursting at the seams in two years time. 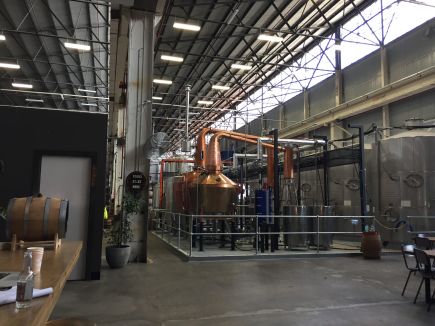 Starward has been a very busy distillery. On Nick’s previous visit he noted how staff worked around the clock on three distillations a day to create as much product as humanly possible – a key factor in keeping their prices within an accessible range for we mere mortals. This commendable approach has led to two key outcomes: a wide range of people have been able to try the whisky and their bond store has filled up in no time. 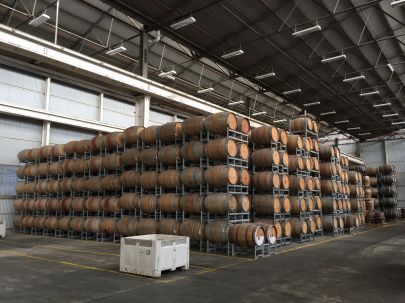 The pressing lack of space at the old airport hangar led to a drastic solution: a new home. Their new premise is much closer to the city of Melbourne, located at 50 Bertie Street Port Melbourne, a short tram ride away from the city.

The cavernous open plan industrial space, some two and a half times larger than the Essendon facility, easily fits all the distillery equipment, the bond store and a slick bar area (although apparently they haven’t managed to find space for the basketball hoop yet). Also found within the walls is a team of fantastic staff members, such as Sasha, Rachel (how’s the hunt for an Aussie husband going?) and Cameron (cheers for showing us around and letting us try some of the best new-make in the business. You’re not really a spud). 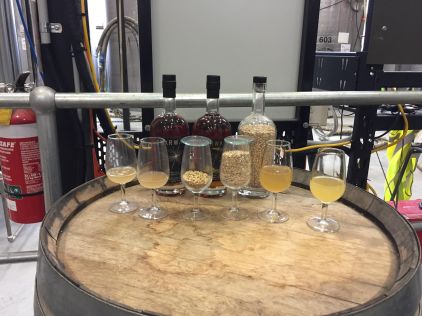 One of the big highlights of visiting the distillery (apart from the tree growing next to the bar) is the chance to try a variety of the New World Projects range, which are the result of the distillers getting creative in their spare time. We were lucky enough to sample the PX Cask #3 (sweet, fruity and now out of stock), Dram Full Single Cask #1 (oaky with a herbal finish), Lui Bar Selection #3 (spicy and rich, our pick of the session) and the First Distillery Last Release (cask strength and punchy). 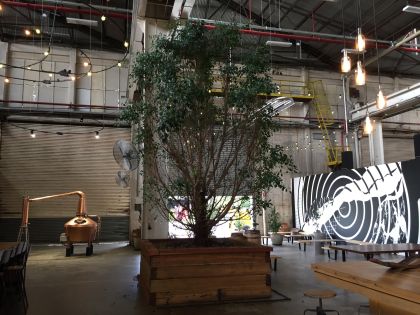 Thanks to everyone at Starward for the warm welcome on a cold day. It’s great having a distillery right in the city so that locals and tourists can easily visit. If you have a spare moment we can highly recommend heading down to Port Melbourne and dropping into one of Australia’s hardest working distilleries.

Starward Distillery is open Friday and Saturday 12pm-10pm and Sunday 12-8pm. Tours are conducted on those days at 2pm and 5pm. 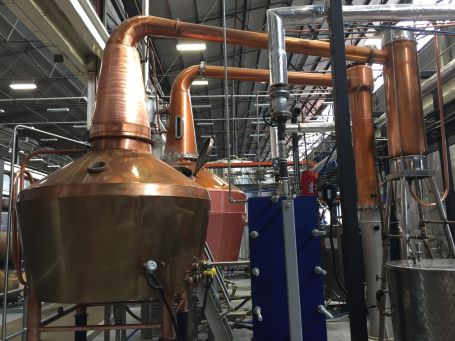 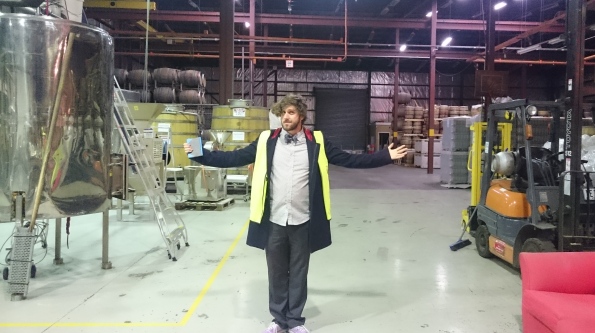 Behold, the New World of whisky!

The New World Distillery is a whisky-making establishment like no other. Equal parts industrial warehouse, hipster bar and mad scientist’s laboratory, stepping through the door I felt like I had slipped down my very own rabbit hole into whisky-wonderland.

Located in Melbourne’s north, the distillery is just a stone’s throw away from the bustling international airport. This is appropriate as the building is a vast refurbished aircraft hangar. The huge room is separated into partitions by rows of whisky barrels – a particularly novel bond store! In one corner of the room is a classy-looking bar with shelves bearing a massive range of the whiskies made on site – each with a premise more curious than the last. It was clearly going to be a good evening. 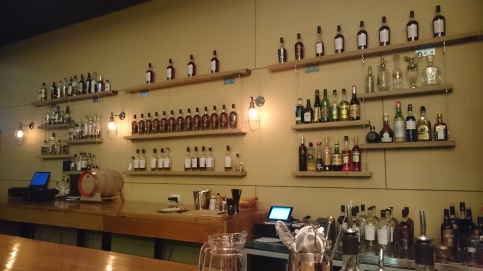 Is that a pumpkin spiced gin amongst that lot?

Before settling in at the bar for an extended tasting session, there was the small matter of the tour. My guide on this adventure around the immense room was Paul, a man who I discovered was no stranger to a bit of whisky waffling. While the whisky production at his distillery was covered in detail, we also got sidetracked with conversations about peat, barley farming, excise tax and wood-smoked barley.

New World Distillery has been operating since 2010, releasing their main product under the label Starward. While Starward was originally exclusively Apera matured spirit, they have recently released a second variety aged in ex-Barossa Valley Shiraz casks. These aren’t the only bottles being created here however. The people at New World enjoy pushing boundaries; if not breaking the rules, certainly bending them a little. The most successful of these are released as a special range known as ‘New World Projects’ and well worth checking out.

The tour is engaging and informative: in particular Paul’s analogies likening making wort to brewing a cup of tea and charring barrels to burning sugar, explaining these obscure concepts effectively. I also got a generous swig of the new make spirit which I found light and fruity without losing its typical high-alcohol warmth. All in all it was one of the more (dangerously) easy-drinking new makes I’ve tried. 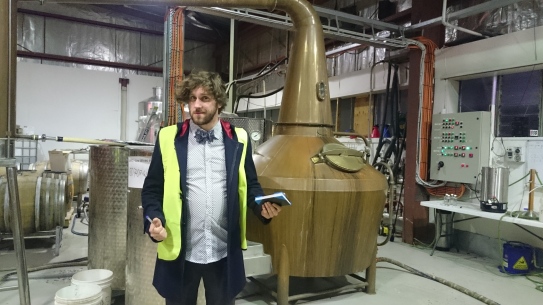 New World also came across as one of the hardest working distilleries going around. With a staff of only five on the floor and three behind the scenes (and Dan), they still manage to conduct three distillations a day. This is achieved by long shifts, late finishes and shared responsibilities, as well as a basketball hoop to keep the staff sane. This hard working approach is one of the biggest factors in ensuring their product is one of the most affordable Australian whiskies going around. 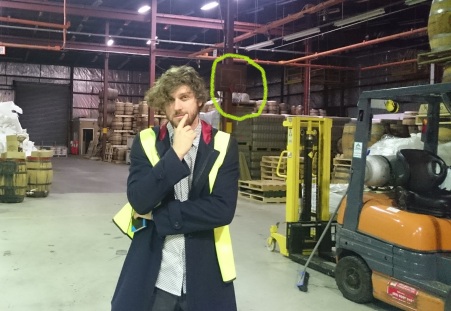 After the tour I took a seat at the bar near a toasty gas heater and sampled the products I had just learned about. First was a comparison between the two Starward bottlings: the Apera cask and the wine cask varieties. While the Apera matured whisky was syrupy and raisiny, the Shiraz aged drop was more savoury with oaky tannins. I still confess to preferring the original Starward release, but my friends who accompanied me on my visit unanimously favoured the wine cask. 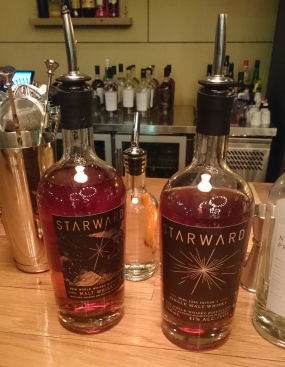 From here I moved onto the bar’s extensive range of New World Projects bottles. These ranged from the sublime – two magnificent port matured whiskies – to the ridiculous – a perfectly clear three year old whisky with all the coloured components of the drop removed. There was also a wonderful 56.3% ‘doublewood’ bottle which had been matured in both the wine and Apera barrels, and a Heartwood-esque whisky with an alcohol percentage in the sixties known as the ‘Smoke and Mirrors’. 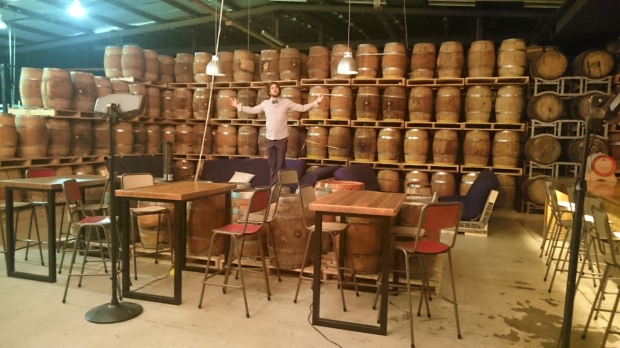 One day all this will be mine… if I save up enough money to buy every barrel.

I left the giant hangar at the end of the night inspired by the products made in my home country. I was once again amazed by the vast contrast in flavours that can be created within a drink which only contains three ingredients. There are some great things happening in the Australian whisky industry and the guys at New World Distillery are right at the forefront.

The New World Distillery is open for tastings and tours at their site at Essendon Fields on Fridays from 6pm and on Saturdays between 2pm and 6pm.