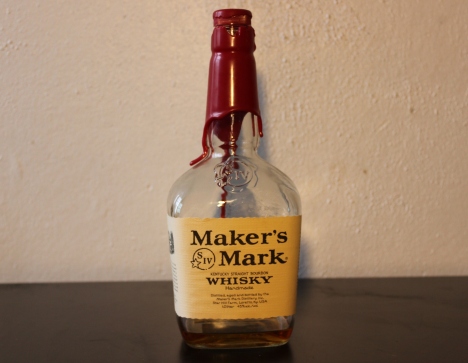 Wearily, the Whisky Waffle boys trudged onwards through the corn-fields of Kentucky. They were on a quest to find the Holy Grail of American whiskey: a bourbon which tasted of more than just bourbon! There were those that called them foolish, others that declared them mad, others still that claimed it was just an excuse to drink whiskey (fair cop), but unperturbed they soldiered on. Finally, they stumbled upon a hooded figure, beckoning them into a distillery.

The dark wooden building with red colonnades looked nothing like its fellow American distilleries. Fire engines and statues of the Virgin Mary in bathtubs lined the path. Our heroes turned to each other thinking: could this be it?

They were handed a dram of the golden liquid, shimmering in the moonlight and wondered what complex and unique flavours they would discover. They drank. And the flavour! It tasted… rather familiar. In fact it tasted… like bourbon. The Whisky Waffle boys’ shoulders slumped. This was not the Holy Grail. Their quest was not at an end.

Makers Mark’s attempts at individuality – the wax dripping down the neck of the bottle, their use of wheat instead of rye alongside the corn and barley, even spelling their product ‘whisky’ despite American conventions – are all a cunning disguise to hide the fact that Makers Mark is, when it comes down to it, a Kentucky Straight Bourbon.

It’s by no means a bad one. The nose presents oak, cinnamon and vanilla which combine to suggest a nice dessert, perhaps a peach crumble – though possibly without the peach. Or the crumble…

The palate is even less like a peach crumble, instead elements of sweet caramel and cornflakes are present, combining to form something akin to Honey Joys. A less dessert-related tasting note is that this is actually a rather spicy drop; a much fuller bodied whisky than many of its fellow American whiskies, and being bottled at 45% surely helps this.

The finish is long and leaves a certain amount of lingering spice: like a half-hearted cinnamon challenge. There are also the more abstract and subjective notes of grass cuttings and saddle leather. You’ll have to take my word for this.

This bottle was intended by the makers of Makers Mark to be a whisky that appeals to people who don’t like bourbon. To that extent, it seems that they have failed. In fact, they have possibly achieved the exact opposite. This is a perfectly acceptable entry-level drop, and one that will keep bourbon drinkers perfectly content.

So if you see that hooded bartender beckoning you towards the Makers Mark on the top shelf, be warned. Look past the metaphorical wig and the fake moustache. Despite this wily disguise, the Makers Mark is not the Holy Grail – it is simply another bourbon.

I’ve been at it again! For those who remember my Akashi review, I seem to have picked up a habit of reviewing Japanese whiskies at a particular bar that I occasionally habituate. Not a bad vice I must admit.

This visit’s subject is Nikka from the Barrel, which comes in an intriguingly plain, stubby little 500ml bottle. The labelling is sparse to say the least, and not particularly useful if, like me, you cannot read Japanese.

It’s not only the bottle that has limited information. The little that I could find out about this drop is that it is a blend (or as Nikka claims, a marriage) of matured malt and grain whiskies from re-casked barrels.

Bottled at 51.4%, the Nikka has a robust, gutsy nose. Dark honey, peach, apricot and orange jump on to the old scent receptors, although m’colleague swears blind that he could smell corned beef (odd man).

On the palate the Nikka is rich and syrupy, with notes of burnt sugar, oak, sultanas and honey, followed up by a pleasant herbal bitterness that reminds me of Speyside. I would take an educated guess that sherry barrels have played a part in the blend, as something of that quality seems to shine through.

The Nikka from the Barrel is a fantastic Japanese blend. It’s bold, gutsy, fun and will put a grin on your dial. Definitely give it some attention if you come across a bottle.