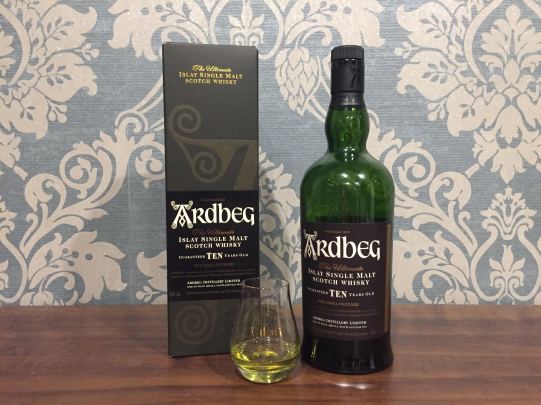 There are certain whiskies that a blog should have in its pages and until now we have been found wanting for this particular dram. Its label rather audaciously claims that not only is it the best whisky on Islay, but is in fact among the best in the world. The funny thing is, we’re actually hard pressed to disagree with it.

The Ardbeg 10 Year Old makes an excellent case for the younger whisky. Generally we equate greater age with greater excellence, but this dram proves that this is not always the case. There is something about the raw, youthful energy in the 10 Year Old that allows the peat monster to really roar and we can’t help but feel that if it was left in the barrel for a few years longer then some of the magic would be lost.

We took it upon ourselves to sample the Ardbeg 10 quite extensively (read quite extensively) and came up with a comprehensive set of tasting notes. We didn’t quite comprehend how wonderful these notes were until we read them back the next day. Normally we don’t present tasting notes in isolation, but these are too good to intersperse with waffle.

Subsequent tastings have not yet turned out quite as many creative thoughts about the 10 Year Old; however we unashamedly stand by what we said in the heat of the moment (mostly).

We have mentioned that the Ardbeg 10 Year Old compares impressively with much older drams, but what if the field was narrowed to only it’s 10 year old contemporaries. For us, the only possible contenders are cross-town rivals Laphroaig and fellow peat-pal Talisker. But if we’re honest, Ardbeg leaves them both in the shade: we truly believe you won’t find a better 10 Year Old whisky on the planet.