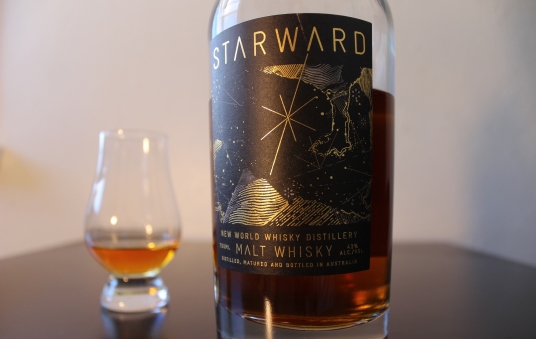 Regular readers of this blog would be forgiven for thinking that all of Australia’s world class whisky is produced in my home state of Tasmania. While I’ll still claim that most of it is, I will readily admit that some stellar drams are being produced on that tiny island up north, which some refer to as the Australian mainland.

One of the most exciting up-and-coming distilleries in the New World of whisky making is the appropriately named ‘New World Whisky Distillery’, which has been releasing whisky since 2013 under the name Starward. And there is a lot to like about it.

For a start, there’s the location. New World is based in Melbourne, the cultural hub of the country (sorry Sydney), and with a bar onsite at the distillery the city has gained a wonderful venue to sample spirits straight from the metaphorical horse’s mouth.

Secondly, there is the label. Starward is an alluring name for a whisky and the gold constellations streaking across a black background capture this image perfectly.

Thirdly there is the price. Australian whisky has the reputation for a remarkably full-bodied flavour, although at an equally remarkable full-bodied price. Starward bucks this trend, providing a local drop that will not break the bank (although perhaps dent the wallet a bit).

Finally, and unquestionably most importantly, there is the flavour. On the nose it is lively: this is a young whisky, but it is far from immature. There are notes of oranges, chardonnay and toffee. No doubting the country of this whisky’s origin.

On the palate there are certainly notes of the raisiny flavours emparted by sherry barrel maturation, although technically speaking, the barrels contained Apera: sherry made in Australia not Spain. Sweetness spreads across the tongue and the orange returns, this time with chocolate, giving a jaffa-like taste. I also picked up elements of glacé cherries and raspberry shortcake. As you do.

The finish is short, but not disappointingly so. There are hints of oak to be found as well as spicy, peppery elements. It is certainly pleasing enough to encourage a second sip!

While the Starward is not the most subtle or nuanced whisky you are ever likely to come across, it is undoubtedly really pleasant to drink. The distillery itself sums it up best with its claim: “Just like the country in which it is made, Starward is youthful, rich and bright”.

It is also just across the water. Whisky Waffle may have to pay it a visit sometime…