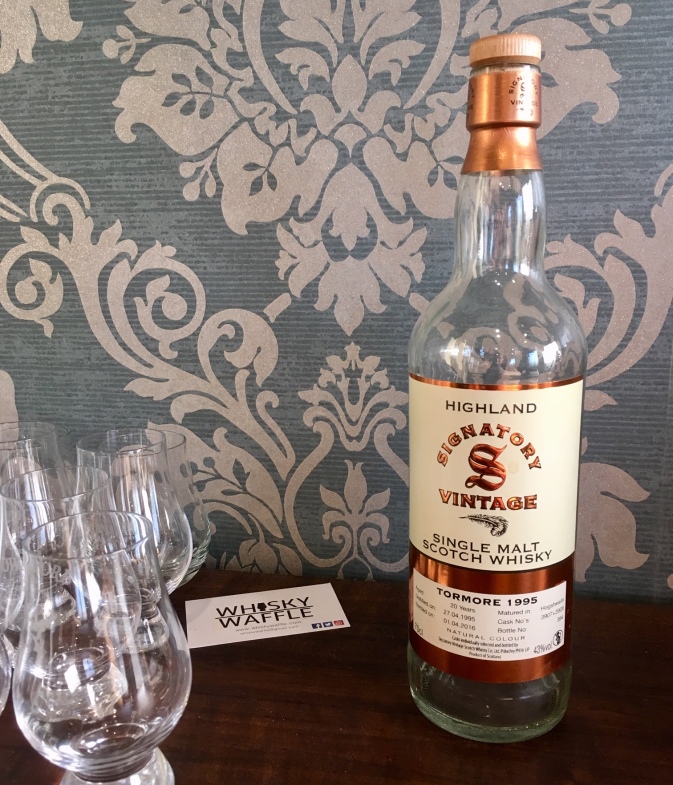 So, you’ve tried a single malt from every Scottish distillery you can get your grubby little mitts on and are now feeling slightly deflated and wondering what to do next? Good news, the answer is at hand: you can find some independent releases and go around again!

Independent bottlings are a wonderful x-factor in the whisky world – they amuse whisky nerds and confuse whisky noobs in equal measure – from a dusty old ‘Douglas Laing’ bottle right through to some ‘That Boutique-y Whisky Company’ with a comical and yet fitting label. Additionally, they also provide an opportunity to access some of the whisky made at lesser known distilleries; in this instance: Tormore.

Tormore is a vast monolithic-looking distillery a kilometre south of the river Spey, and is known mostly for providing spirit for Chivas-related blends. It was one of the very few distilleries built in the mid-20th century and is tricky to find iterations of outside of duty free. Unless, of course, it’s been independently bottled!

My particular independent bottler is Signatory Vintage, which I know next-to-nothing about – and freely confuse its logo with a bottle of Springbank. It would certainly fail to stand out on a shelf in a bar, which is why I think I have unearthed a bit of a hidden gem.

Stats! Something every whisky nerd can’t live without (no wonder we haven’t handled the transition to NAS releases particularly well)! This bottle of Tormore sat in ex-bourbon hogsheads between 1995 and 2016, making it 20 years old and is a marriage of cask 3907 and 3908. My particular bottle is number 394 and sits at a gentle 43%. And it’s rather tasty.

The nose is oozing with sweet caramel alongside barley sugar and stewed figs. It subtly hints at oak, along citrus and melon notes. The palate is as surprising as it is delicious, full of tropical fruit characteristics. Banana stands out the most, as well as creamy vanilla and chopped nuts – it’s basically a banana split in whisky form! The finish is medium in length and gently earthy – not smoky but at least slightly cured – while vanilla custard flavours delicately linger.

This is a lovely little drop; one that perfectly accompanied the Tasmanian summer and BBQs that ensued and if it were not for an independent bottler setting aside a cask here or there, it’s not one many of us would be able to enjoy. So, if you’ve been holding back and sticking to the distillery’s own releases – well, maybe it’s time to give something independent a try.

Ok, I freely admit, that statement alone does not do this dram justice. After all, this is whisky made at one of the oldest distilleries in the world! And yes, I do include Scotland in this claim.

Buffalo trace was founded in 1787 at a small settlement called Lee’s Town, a town presumably established by someone called Lee. The title ‘Buffalo Trace’ was given to it much later, but refers to the 18th century name for the distillery’s location: a trail forged by American bison as they crossed the Kentucky River. Buffalo Trace continued sending whiskey up the river across the ensuing centuries – even during prohibition when it was given a permit to produce medicinal whiskey. Unsurprisingly it was a very popular remedy.

But how does it taste?

On the nose is, as you’d expect, sweet corn and vanilla, but also present are subtle notes of cinnamon and brown sugar. The palate is lightly spicy with grassy oak notes. The finish is medium in length with flavours of toffee and honey.

All in all, Buffalo Trace is a great example of a bourbon. It’s accessible and, all things considered, pretty darn smooth. Best of all, it’s a bourbon with a story. It allows you to cast your mind back to the late 1700s when settlers battled to survive – and make whiskey on the side!

As a general rule we Whisky Waffle boys tend to be single malt snobs rather than blend bogans. As easy drinking as a blended Chivas 21yo is, we’d just as soon get to grips with a lively Balvenie 12yo single malt. However, one drop that we were lucky enough to try recently suggests that we just may not be drinking the right blends.

Berry Bros and Rudd, better known for their vintaged Glenrothes range, put out a yearly blended malt release called the Blue Hanger. The bottling is named after Lord William Hanger, who was famous for his habitual striking blue attire (just like the blue Power Ranger. Here’s to you Billy!). The original release was a blend of specially selected casks from the Glenlivet and Glengrant distilleries. Eventually stocks ran out (hence the emergence of the Founders Reserve…) and now in this, the 9th edition, Berry Bros and Rudd have combined (like Megazord) 17yo Clynelish and 18yo Glen Elgin with both 23yo and peated 7yo Bunnahabhain.

With such a pedigree it is no wonder the Blue Hanger claims to be the ‘collectors blended malt’. But is it worth adding to your own collection? Short answer: yes!

But of course, this is Whisky Waffle, and so we will also supply you with a long answer too. The nose is light and fruity, and we were able to find strawberry jam, dried apples, quince paste, cured meats and Chardonnay wine. It’s essentially happy hour in a bottle.

The taste is light but flavoursome. Under-ripe cherries, sherry and cola (NB: just a tasting note. No actual cola was brought anywhere near this baby. We’re not monsters you know) combine to sweetly dance across the tongue, followed by a gentle waft of cigar smoke. The finish is long, with the peat smoke slightly more prominent, and hints of pepper, burnt wood and gooey toffee apple.

If you served this to us blind (as in blindfolded, not blind drunk), we would be unlikely to pick it as a blend. The high quality aged single malt elements that make up the Blue Hanger work together with delicacy and harmony to make a very enjoyable dram; the smoky, salty Bunnahabhain giving depth to the high notes of the Clynelish and Glen Elgin. If you tend to think that blends are beneath you, then like us, you’ve probably just been drinking the wrong ones. 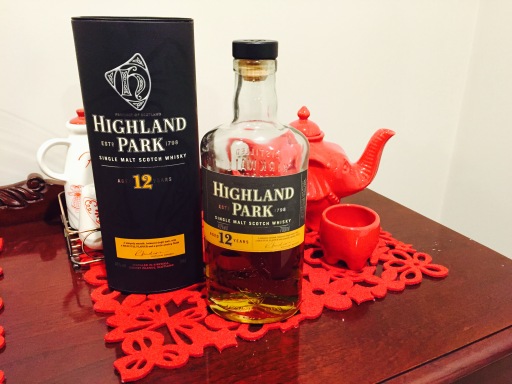 Single malts. They’re a varied lot. Some people like peat monsters. Some like sherry bombs. Others enjoy their whisky light and floral. Others still prefer their drams sweet with hints of vanilla. Pleasing everyone with one drop, however, is a much harder task. Unless, of course, you happen to have a bottle of the Highland Park 12 Year Old on your shelf. This bottle truly is the great all rounder of Scottish whisky.

Highland Park also has the distinction of being Scotland’s northernmost distillery, located on the largest of the Orkney Islands, pipping its neighbour Scapa by under a mile. As the island group was settled long ago by Vikings, it should come as no surprise that the flavours on offer are a veritable smorgasbord.

Up first comes a nose with many varied elements: a whiff of grapes and malty biscuits. There is chocolate, so dark it is mostly cocoa, mingling with notes of pear and bubblegum. Finally is the smoke: far subtler than anything from Islay. It brings to mind smouldering vegetation, an attempt to create a fire from damp leaves on a drizzly day.

The palate is equally varied. It initially suggests a roast meal: beef, parsnips, even gravy, before giving way to mandarin, brown sugar and chocolate milk. The smoke lingers gently, now mostly burnt out and close to charcoal. Finally this all gives way to a long spicy finish with salt, tobacco and mint combining with flashes of caramel.

The Highland Park 12 Year Old is unlikely to be anyone’s number one whisky. It is not weighted in a particular direction to please one group of whisky fans over another. Instead, it sits squarely in the middle, a dram to be enjoyed by everyone no matter their preferences. This is a whisky that brings people together, and if that is not a glowing endorsement, I don’t know what is!

Regular readers of this blog would be forgiven for thinking that all of Australia’s world class whisky is produced in my home state of Tasmania. While I’ll still claim that most of it is, I will readily admit that some stellar drams are being produced on that tiny island up north, which some refer to as the Australian mainland.

One of the most exciting up-and-coming distilleries in the New World of whisky making is the appropriately named ‘New World Whisky Distillery’, which has been releasing whisky since 2013 under the name Starward. And there is a lot to like about it.

For a start, there’s the location. New World is based in Melbourne, the cultural hub of the country (sorry Sydney), and with a bar onsite at the distillery the city has gained a wonderful venue to sample spirits straight from the metaphorical horse’s mouth.

Secondly, there is the label. Starward is an alluring name for a whisky and the gold constellations streaking across a black background capture this image perfectly.

Thirdly there is the price. Australian whisky has the reputation for a remarkably full-bodied flavour, although at an equally remarkable full-bodied price. Starward bucks this trend, providing a local drop that will not break the bank (although perhaps dent the wallet a bit).

Finally, and unquestionably most importantly, there is the flavour. On the nose it is lively: this is a young whisky, but it is far from immature. There are notes of oranges, chardonnay and toffee. No doubting the country of this whisky’s origin.

On the palate there are certainly notes of the raisiny flavours emparted by sherry barrel maturation, although technically speaking, the barrels contained Apera: sherry made in Australia not Spain. Sweetness spreads across the tongue and the orange returns, this time with chocolate, giving a jaffa-like taste. I also picked up elements of glacé cherries and raspberry shortcake. As you do.

The finish is short, but not disappointingly so. There are hints of oak to be found as well as spicy, peppery elements. It is certainly pleasing enough to encourage a second sip!

While the Starward is not the most subtle or nuanced whisky you are ever likely to come across, it is undoubtedly really pleasant to drink. The distillery itself sums it up best with its claim: “Just like the country in which it is made, Starward is youthful, rich and bright”.

It is also just across the water. Whisky Waffle may have to pay it a visit sometime…