We’ve reached a point in the Tasmanian whisky industry where Tim Duckett can do whatever the hell he likes. Justifiably, too, having broken so many rules with his Heartwood series, resulting in the creation of whiskies so good and so bizarre you’d be forgiven for thinking they were taken straight out of a whisky nerd’s fantasies. However his latest project, under the innocuous sounding moniker Tasmanian Independent Bottlers (or TIB for short), seems to plant itself firmly in reality.

The first release was the product of only one distillery and only one barrel type and was originally intended to be released at 46%, before Tim caved and bumped it up to 48.4%. No poetic title is required – it is simply named after its cask number – and the label is classy and yet plain, lacking in the unique quirky artwork found on Heartwood bottles. Cosmetically this is the Beatles White album released directly after Sgt Peppers Lonely Heart Club Band.

However, Tim still holds the ace up his sleeve: a quality Tasmanian spirit and an intriguing barrel. The first TIB release is from midlands paddock-to-bottle-distiller Redlands, and it has been aged in a Muscat cask.

Sorry, I got a little carried away there. But you get me, right? Redlands spirit in Muscat barrels assembled by Tim Duckett? This bottle was a must have to me… and it doesn’t disappoint.

It has a big, broad nose full of toffee and oak. There are many tiny subtle aromas breaking through, including pepper, blackberry and spearmint leaves. The palate is quite sweet, loaded with sticky caramel, raspberry jam and dark chocolate. The finish is short and spicy – spicier than most Heartwoods ironically – with lingering raw sugar notes.

Inevitably anyone looking for the next Heartwood release in this bottle is going to go away disappointed – because that’s not what TIB is. This is a far subtler and gentler single malt which does not possess the x-factor of Tim’s other releases. This is not a bad thing, though – it’s a different thing, and a thing that will appeal to some people and not others. It is designed to be more accessible and perhaps easier drinking than Heartwood and every now and again this is exactly what I want. The Convict Resurrection, Vat Out of Hell and Calm Before the Storm are fantastic – but I’d also recommend getting to know their younger brother.

Yes, Ted hit his thumb with a hammer

Compared to the glut of distilleries in the Southern region of Tasmania, the North West has been fairly light-on for dram making. To be accurate, hitherto there has actually been just the one producer (although they make up for that by being the largest in the Southern Hemisphere). Thankfully, that paucity is set to change with the opening of a new kid on the block – say hello to Southern Wild distillery.

Based in Devonport, Southern Wild is the brainchild and consuming passion of one George Burgess. We first met George at a dinner in 2014 where he confided to us his dream of establishing a distillery in his home town and “teaming up with other passionate specialist Tasmanian producers to create small batch varieties of unique hand-crafted and seasonal/rare finest quality distilled spirits and liqueurs”. Our response was ‘nice one, it’s good to have dreams’, but boy has he really followed through with that threat!

George: one day this will be whisky!

A food technician by trade, George has already spent years developing the skills and know-how that has allowed him to dive deep into the world of distilling. He loves discovering new ingredients for his gin-making and tinkering about with different flavours and scents. In fact, the name Southern Wild was inspired by the raw natural beauty of the places he finds some of his botanicals. “I’ll be going down some rough bush track, no phone signal and a nagging feeling of lurking cannibals. Suddenly the bush will clear and you’ll find yourself in this beautiful location encircled by nature and meet the most friendly, down-to-earth folk tending this amazing locally-grown produce.”

Formerly known as Devonport Distillery, Southern Wild has moved about a bit over the years – and its shiny new venue is not even its final location! Devonport has been going through a bit of an identity crisis of late which has led to the creation of what is known as the ‘Living City’ project. In a nutshell, this venture aims to knock down chunks of an inefficient and spread out CBD and rebuild them with a focus on fresh local produce, performing arts spaces and, eventually, a foreshore precinct. The former will be housed in a glamourous farmers market known as Providore Place, with small pods for local producers such as Southern Wild Distillery to sell their wares. A brand new building will be created for the distilling as the current home is a converted loading bay at the back of the council building – however we must admit, for a loading bay it scrubs up rather nicely. 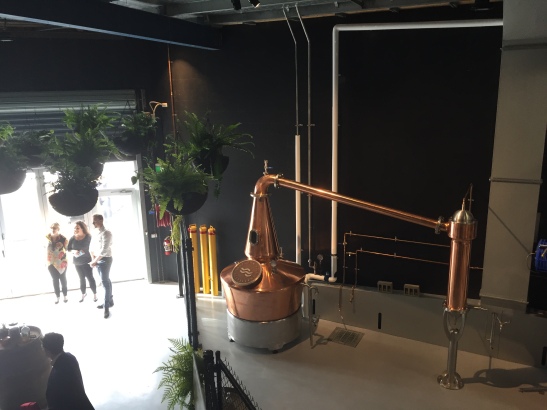 Stills and suspended plants make for the best distilleries

The room is dominated by the shiny new still, while a gleaming bar is a hive of activity with recently hired bar staff making fancy cocktails. Overlooking the entire room is a mezzanine with space for a band to play – a highlight for George when he first sighted it, telling us his response was “you had me at mezzanine”. Behind the music/hangout area is what looks like a mad scientist’s laboratory, but in reality is the space where George creates and tinkers with his product.

While there are currently a few barrels maturing several intriguing varieties of what will one day be called whisky, George unfortunately doesn’t have any ready yet. Instead he is focusing on what is truly his pet project: his gin. Ever since we’ve known him, George has been raving about his passion for gin and now he’s created not one, but three, each uniquely Tasmanian. Named ‘Dasher & Fisher’ after the two rivers which flow into Devonport’s own waterway, the Mersey, he has created ‘Mountain’ gin, richly flavoured by Tasmanian pepperberries, ‘Meadow’ gin, containing a strong hint of lavender and ‘Ocean’ gin, intriguingly salty with notes of wakame seaweed. While Ted loved the London dry style of the Mountain, Nick was more into the coastal aromas of the Ocean.

The Ocean gin, surrounded by its botanicals

While this is only the beginning for Southern Wild, it certainly has a bright future ahead of it. It will be fascinating to watch the evolution of the distillery as it transitions from its temporary residence to its permanent home and the inspiration that provides George in his creations. And of course, being Whisky Waffle, we are particularly looking forward to the moment when we can share a dram. From the sneak peak we’ve had though, we are confident that Southern Wild will be releasing whisky that truly speaks for the place it was made, just as its maker intended.

The still-maker, the still-man, and two idiots who are still waffling