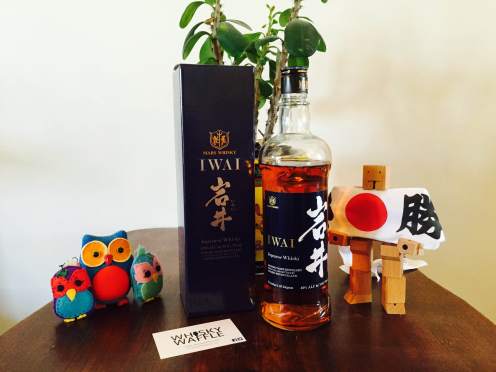 Japanese culture is intriguingly dichotomous in nature. On one hand you have a proud culture with ancient, beautiful and highly ritualised traditions such as the tea ceremony. On the other hand, as anyone who has had the confusing pleasure of watching a Japanese gameshow can attest, there is a definite kooky streak to the inhabitants of the Land of the Rising Sun.

This duality of nature can also extend to the whisky that the Japanese produce. Shinshu Mars Distillery, located in Nagano Prefecture, was built by the Hombo family in 1985 but was closed in 1992 due to a decline in the local whisky market. It reopened in 2011 and is apparently considered to be well respected in the Japanese market. So far so traditional; it’s the whisky that they produce that’s a bit weird.

Iwai, named after Kiichiro Iwai who designed the stills, is one of the base releases for Shinshu Mars. According to one of the few bits of information written in English on the packaging it is aged in small bourbon casks, which rather confused me when I first opened the box. Instead of the normal pale straw colour that you would expect from a bourbon barrel aged whisky, the Iwai is instead the deep, rich amber colour of a whisky aged in port or sherry casks… Or one that’s had E150 caramel colouring added to spruce it up a bit, which was a thought that crossed my mind until I stumbled across a rather curious nugget of information.

Turns out that mash bill for the Iwai is mostly corn, with malted barley making up the remainder. So for all intents and purposes, the Iwai is essentially a Japanese bourbon! How mad is that!? No wonder the colour is so dark. The flavours also make much more sense when considered in the context of an American whisky rather than the Scottish style that is predominantly produced in Japan.

The nose of the Iwai is dominated by sweet, buttery caramel which hangs fat and low. Underneath sits hints of rose petals, vanilla and almonds, with a touch of salt thrown in at the end. You occasionally hit a bit of a rough edge, but it doesn’t throw things out too much. On the palate the Iwai is thick and oily, with a dull spiciness that crawls over the front of the tongue. Sticky dried fruits, aromatic spices and a grating of fresh ginger stroll casually through the middle, while the finish is gentle and tingly, with a slight apple sign-off.

While the Iwai isn’t the best Japanese whisky you will ever taste, it’s certainly one of the most interesting. There definitely isn’t anything else like it kicking about in Japan (at least that I’ve encountered). To be honest, it’s probably better than quite a few cheap real Bourbons. But then, the Japanese have always been good at taking the ideas of the west, tinkering about with them a bit, and then adding their own quirky spin to make something that is all their own. 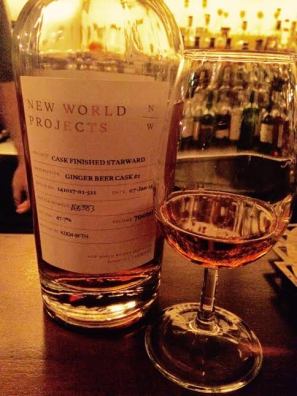 There are some interesting experimental drams in the market, often tucked behind the more famous and mainstream variant at a bar, or in old dusty collections held by people who bought a one off bottling at a garage sale. New World Distillery on the other hand is not tucking their experiments behind anything, and the operation is far from dusty being more akin to a well-resourced military installation. Housed in a disused aeroplane hangar is the cross between Willy Wonka’s factory and Area 51, although the focus is on whisky and not chocolate or alien secrets.

Being founded on the principle of showing the world what whisky can be, with a “sky’s the limit” attitude, it is no surprise that the team that brought us Starward would release something that stretches the concept of whisky to new heights.

On the nose, you’d be hard pressed to pick it as a whisky. But the same can be said for other expressions from many different distilleries that have played with different casks. It you’ve only ever drunk a bourbon cask Highland whisky, then putting the nose into a PX finished Islay might create the same level of confrontation and confusion when told that not only is it whisky but it is as single malt as the next dram. The information that can be beaten out of the loyal distillery workers reveals that it is a virgin cask that has been stained with fermented ginger beer that has its own secret recipe. Starward whisky is then aged for three months on top of its normal maturation to soak up the gingery goodness.

Ginger is really the buzz word here. So much ginger. It smells like ginger and when you stare at in your half empty glass it even starts to look like ginger. That might be the half empty element assisting with that. The classic tropical fruit that is a signature of the Starward is still present, however. Nice aromas of pineapple, banana and mango. A good amount of citrus that mixes will with the ginger smell to give it a spicy aroma. It also smells like ginger.

Once tasted it will continue to confuse and delight. The mouthfeel is particularly good and I’m sure the 47.7% alcohol by volume was very carefully chosen with the texture in mind. On the palate, you guessed it: cloves. Also ginger. There is a good combination of spice and fruit to create the feel of a cocktail and it may yet be a mixologist’s inspiration. It is naturally sweet with some light vanilla and the prickle from the spiciness brings that out even more, in the way that sweet and sour emphasise both rather than diminish either. The finish is nice and long, due to the intensity of a dominant flavour and also the not-insubstantial alcohol content.

It is probably plagiarism to sum up this whisky as weird and wonderful, as I am sure that many reviews would use the same phrase. It is something that I would look out for tucked away at a bar or nestled in among the fur stoles and incomplete jigsaws at a markets, but given that this modern and funky take on whisky is in such high demand – evidenced by the fact that this is the second batch – it is probably unlikely to be there. Better to head out to New World Distillery, bonk a cooper on the bonce, and run off with your own bottle.

P.S. Neither Mooresy nor the Whisky Waffle boys advocate violence towards people in the whisky industry. We love those guys. For obvious reasons.