Dan Woolley only drinks whisky. Not beer, not wine, not vodka. Not even crème de menthe. Some would say he’s obsessed – himself included. His wife made him choose between her and whisky. He’s happily single now.

There is one whisky, however, that he obsesses over above all others: Laphroaig. He is one of the top brand ambassadors for Islay’s peated behemoth and I count myself enormously lucky to have spent an evening in his company as he talked us through seven (yes! Seven!) different drams of Laphroaig. While the majority of guests were enamoured by the smoky sensations in their glasses, not everyone was convinced. This is a fact Laphroaig have not only come to terms with but embraced, forming the theme of the dinner: Opinions. As Dan said: “if we all liked the same thing we’d all be drinking vodka lime and soda and I’d have killed myself a long time ago.”

The Central in Devonport put on a fabulous event with many amazing courses all created from local ingredients. In particular the natural Spring Bay oysters went down a treat – particularly with a dash of Laphroaig Select cask dribbled on top.

The Select Cask was up first – an entry level for sure – but while sipping it I learned about the fascinating range of casks that went into creating it. A Whisky Waffle favourite was up next, the Quarter Cask, a whisky which spends the final nine months of its gestation in 100L barrels like a chain smoking baby. 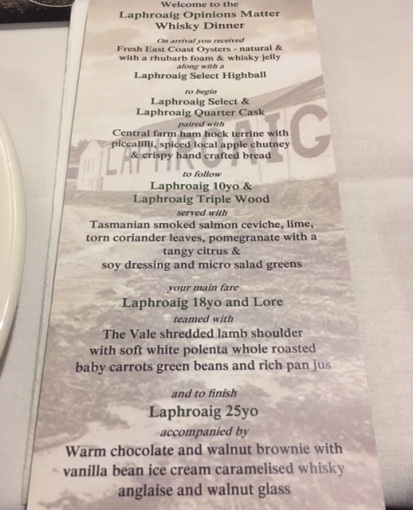 It wouldn’t be a Laphroaig night without the highest selling peated whisky on the planet: the 10 Year Old. Made to an “old family recipe” it packed the required peaty punch and is the ever faithful “backbone” of the Laphroaig flavour. Next up was Dan’s favourite, the Triple Wood. It was sweeter and fruitier than those that went before thanks to two years spent in Spanish Oloroso barrels.

Dan then laid down the Lore, a dram he described as their most ambitious whisky yet. Distillery manager John Campbell attempted to create a bottle of Laphroaig that tasted like what was offered 200 years ago. I can’t vouch for its accuracy, but it was certainly one of the tastiest and smokiest of the night. In the words of Dan, “it makes Port Ellen taste like Johnny Walker Red”. 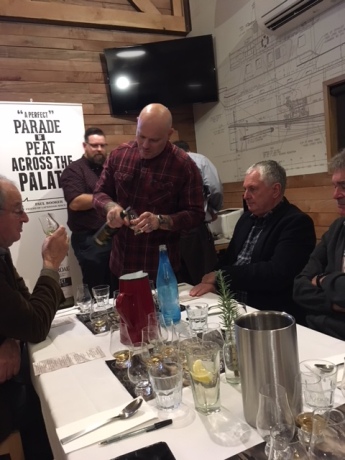 The final two drops were particularly special – made even more so by the lack of availability worldwide. Drinking the 18 Year Old and 25 Year Old was a weird experience as by this end of the night my palate had stopped noticing the peat in each dram and I was discovering subtle and nuanced flavours underneath. The 18 was lighter and mysterious, like chasing a nymph through an enchanted wood. The 25 was a Laphroaig dessert whisky – strawberries, white chocolate, whipped cream and other naughty indulgences. The peat was hidden away at the back of the palate and made me wish I could repeat the tasting the next day but in reverse order.

The night concluded in a truly memorable fashion, as every participant in the dinner was presented with a customised Laphroaig bottle to take away. Mine was particularly appropriate considering the tasting notes found within this very article. Dan graciously added his signature to the unique bottle, along with this piece of wisdom: “Do you know what the best whisky in the world is? Free whisky.”

It was an educational and enjoyable evening, capped with a rousing toast which I can’t help but repeat: “LONG LIVE LAPHROAIG!”