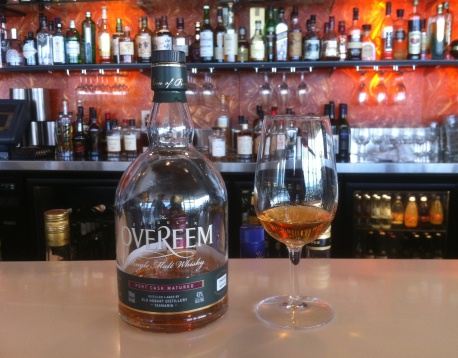 Whiskies so often seem to reflect their creator. Bruichladdich whiskies display the passion and local ethos displayed by Jim McEwan. Variously finished Glenmorangie drams showcase that experimentation possessed by scientist Dr Bill Lumsden. Whiskies made at the Old Hobart Distillery, much like their creator, Casey Overeem, have true character. And much like Casey, this character is very likeable.

Old Hobart Distillery releases their whisky under the label ‘Overeem’ and is part of a growing collective of whisky makers from southern Tasmania consistently churning out a high standard of products. Overeem, like Lark and Sullivan’s Cove, use French Oak ex-port barrels cut down to 100 litres to mature a percentage of their whisky. The flavours created by this process, similarly to its contemporaries, are equally extraordinary. But there’s something a little extra special about the Overeem. It has an element of ‘handmade’ about it, something that suggests this whisky is crafted instead of distilled.

The nose is light but enticing. There are notes of berries and stewed apricots alongside faint traces of ginger and fennel. There are also some gloriously Tasmanian woody notes which call to mind a home-workshop stocked with Huon Pine.

The palate is richly flavoursome and offers many layers to discover. It is initially sweet and spicy, offering fizzy orange sherbet notes with a dash of pepper preventing it from becoming too sweet. There is also a degree of citrus and maltiness, combining to give the impression of a freshly baked sponge cake with lemon curd. The finish is lengthy and contains faint raisiny and caramel notes: finally, the much-vaunted fruitcake has made a subtle appearance!

This is a fantastic example of a Tasmanian Whisky in more ways than just flavour. It is the perfect illustration of a micro-distillery whose focus is on creating a well-crafted product. This is not done simply as a business venture, but instead as a way for one man to create the spirit that he loves. And Casey Overeem’s intent is certainly apparent when drinking the whisky which bears his name.