All joking aside (and there were a few of them this week) Johnnie Walker has produced a formidable range of whiskies and we can understand why they are the most popular in the world, even if we respectfully disagree. 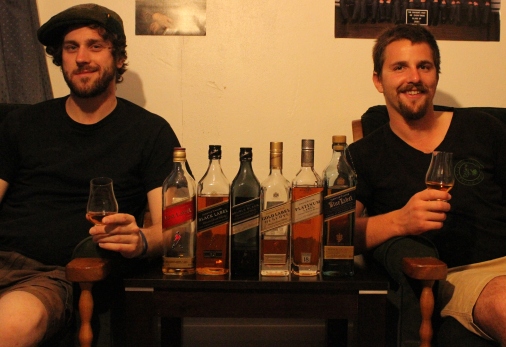 So what have we learned throughout Johnnie Walker Week? Let’s pick through the shrapnel:

So there you have it. Whisky Waffle’s first ‘event week’ has concluded. Thanks for checking it out and we hope you appreciated our ramblings and perhaps you have also broadened your whisky drinking horizons. If anyone has their own opinions or rankings of the Johnnie Walker range, let us know in the comments!

Until next time, keep on waffling,

Let us picture a woman: she wears chic white designer clothes, and her platinum blonde hair is perfectly styled. She is beautiful, with flawless ivory skin and delicate features, and yet her pale grey eyes are cold and her face is blank of emotion. She is like an icy white marble statue come to life. Her house is filled with expensive minimalist designer furnishings, all in white, and the effect is striking and elegant. Yet somehow it leaves you feeling empty; it’s too clean, too clinical, lacking in any warmth that allows you to develop an emotional connection.

If you distilled the idea of the white lady and her house, and bottled it, then you would capture the essence of the Johnnie Walker Platinum Label. The Platinum is marketed as one of the top tier bottlings in the standard Johnnie Walker range. It is delicately assembled from a selection of minimum 18 year old single malt and grain whiskies, and was inspired by the private blends created as gifts for the upper echelons of the Johnnie Walker hierarchy.

On the nose the Platinum is very light and delicate, with hints of dusty oak floorboards, cereals such as bran, oats and barley, chocolate, and coffee. There is no sweetness or fruitiness here, and as such the scent is rather dry and wooden as a result. The mouth is extremely smooth, with subtle flavours of polished oak and walnuts. A flicker of sweetness is allowed, perfectly balanced by a dash of bitterness. The end is dry and provides a grind of black pepper followed later by a sprinkling of ash.

There is a sense that the Johnnie Walker Platinum Label is a stylish drink created for those with sophisticated tastes, and yet in trying to achieve this they somehow miss the point. Yes, the flavours all work together superbly, but as a whole it’s too refined, polished to the point where there is no spark left to bring it to life. The white lady is beautiful to behold, but be warned, her heart is cold and she will not give you the love and warmth you crave.

Find out about the rest of our multi-coloured adventures:

Johnnie Walker: which is best?

I like to consider myself somewhat clued up about whisky. Over my time I’ve had a dram or two. I dare to think of myself as an experienced whisky drinker. And I would like to believe that just maybe, I could tell a $200 bottle from one costing pocket change.

But then there was one night. One terrible night. One awful night when everything I knew about whisky hung in the balance. I am referring to: Johnnies Night.

Johnnie Walker is the best selling maker of blended Scotch whisky on the planet. Despite this, or maybe because of it, my colleague Ted and I have never truly cared about any of their products. This of course was most likely a result of our dabbles as younger, broker men, when we frequently ‘tasted’ the Red Label multiple times an evening at various social events we attended, and then were too stingy to seek out their more expensive and esteemed bottles. Slowly and surely, however, we built up a collection: through our own purchases, our fathers’ purchases, and purchases by our generous friend Stephen who provided the two most valuable bottles (things haven’t changed that much – we still can’t ordinarily afford a bottle of Blue simply for a blind tasting night!)

The task was simple – six expressions of Johnnie Walker: Red, Black, Double Black, Gold, Platinum and Blue, were to be blind tasted and we would predict which dram was which. Now, I say simple. This turned out to not be the case.

An artsy close up of our un-whisky friendly glassware. They have colour-coded tags, though!

I’ll make the excuse here and now that we had never tried several of the expressions before – but this could not explain our poor showing when the results came in.

I won’t go into the detailed statistics of the night, partly because it would make tedious reading, and partly because we are far too embarrassed to share them with the world. Suffice to say that we rated the blue far lower than it’s worth and overvalued the red label. The Platinum and the Gold didn’t fare any better, while the Double Black proved popular.

Maybe this says that we do not have as expensive taste as we claimed. Or perhaps it says we do not have as developed palates as we think. Eager to prove this latter fact wrong, Ted and I had a second attempt, this time correctly identifying the Red, Black and Double Black, but then mixing up the upper three.

Lots of Johnnie Walker – some would say too much…

At the end of the night, we were confused, but not perturbed. It was the first blind tasting we had ever done, and we finished the night with a better understanding of blended whisky. The results had turned up the fact that the Gold and Platinum bottles did not appeal greatly to us, nor justify their price tags. The Blue Label was slightly better received, although embarrassingly, so was the Red. Finally, the biggest revelation of the night was our discovery of, in our opinion, the best Johnnie Walker expression.

Ladies and Gentlemen, I give you some actual consumer advice.

Taking into account flavour, value, personal preferences, and the level of inebriation we had reached at the conclusion of the night, we found the best bottle of Johnnie Walker colour expression to be the Double Black.

That said, I’d take a bottle of Glenlivet any day.