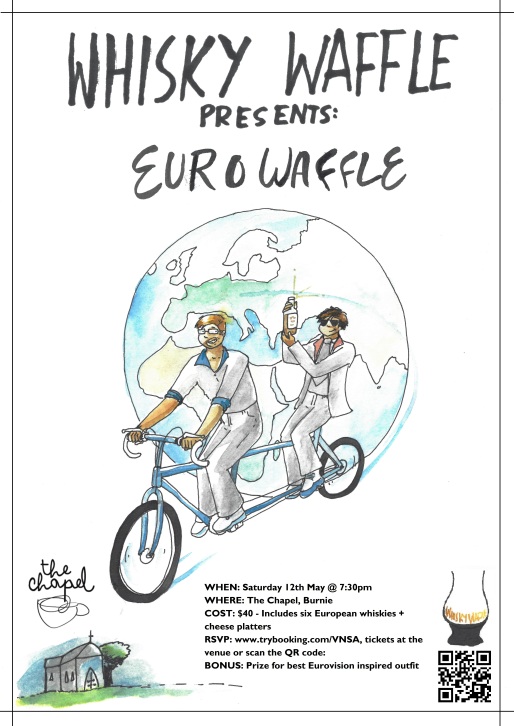 It is that time of year again where the entire Continent (and Australia) gathers together in the name of peace, love and whisky.

This year six nations will be competing to take out the 2018 EuroWaffle Whisky Contest, pitting talent, taste and Continental good looks against each other in the world’s most dram-atic contest. As usual, the night will be conducted with the highest integrity, with whiskies judged on their merit rather than for cheap political advantage.

This year the contest will be held in the country of Chapelonia, which stunned the world last year with their winning entry My Hipsters Don’t Lie performed by bearded sensation Andreai. Amongst the crowd will be several past winners, including Lordi (devils for a dram), Conchita (maker of Bearded Lady Moonshine), Alexander Rybak (who matures spirit in his violins) and those old ladies from Russia (you can make more than just bread with barley).

To get into the spirit of the night, the audience is encouraged to slip into their best Eurovision-inspired attire; there may even be a prize for the best dressed!

Tickets for EuroWaffle cost $40 and are available HERE or at trybooking.com. This will cover six European whiskies and cheese platters.

So come along and help us celebrate goodwill between nations and petty political point scoring while Eurovision provides us the perfect excuse to drink obscure European whiskies while dressed up as ABBA.

Where: The Chapel, Burnie

Who: The people of Europe

Why: Because Australia is part of Europe (apparently)

The year is coming to a close dear friends, and while there have been good times and bad, one thing that I have consistently enjoyed is drinking whisky. The drams have been varied, and thankfully the overwhelming majority have been at least good, while quite a few have been interesting and some even down-right exciting. With a new year swiftly encroaching, it is time to cast the mind forward and ponder one of the big questions in life: what to drink next year? Well, after some cogitation, here are five whiskies that I would like to get to know a little more intimately in 2015:

I love the stuff that Balvenie puts out (the 12yo DoubleWood for example). They’ve always got great character that brings out the best of Speyside; smooth, sweet, oaky and a variety of spice and fruit from the different finishing methods they use. Quite frankly, the thought of a 21yo Balvenie finished in 30yo port pipes makes me twitch in a slightly manic way and want to use my outside voice indoors (such a rebel I know). I suspect it will be super smooth with an amazing depth of character for its age thanks to the port influence.

OK, I’ll make a small confession: I have actually tried the Green Label before. But in my defence it was quite a while ago when I wasn’t as educated about whisky and it was only really a sip, so I have no memory of it to speak of. Therefore I’m just going to pretend that the whole thing never happened and start anew. If you followed our Johnnie Walker Week event you’ll know that the Green is no longer produced, and that our tame writer Moorsey and plenty of other people around the traps rate it very highly, ranting about it in superlatives and even going so far as to commit poetry. So I’m really rather keen to see how it stacks up when I eventually stumble across a bottle.

Here at Whisky Waffle we haven’t really delved into the world of bourbons yet. I’ve tried various bits and pieces here and there, but I’ve never had one of the older, super-handcrafted numbers. I’ll reserve judgement on the bourbon genre as a whole for the moment, but I will say that I have strong suspicions that the older, rarer drops are a much different kettle of fish to their younger kin. By all accounts the Pappy Van Winkle Family Reserve 23yo is a big deal, a man amongst the boys. Part of the reason for its inclusion on this list is that I’ve actually seen a bottle of it on a bar shelf in my area. A nip will cost me a pretty penny, but odds are that it’s worth it.

Wales. Not the first place you may think of for whisky (but certainly not the last. Who knew Liechtenstein makes the stuff, but there you go). Penderyn is the first and only Welsh distiller in over 100 years and uses a novel single-still method, so I’m quite curious. Madeira casking is never a bad thing, and you know what the best bit of all is? I actually own a bottle. Nick gave it to me after he returned from the UK, so it’s waiting ready on my top shelf for the perfect moment.

So this one is probably a bit of a stretch, but I’d be so excited to try it. Redlands Estate is a new distillery in Southern Tasmania which we visited earlier this year. According to Dean Jackson, the head distiller, the first barrels are slated for release in 2015. I know chances are slim to none of me getting my hands on a bottle as they’ll all be snapped up in an instant, but I’ve tasted the new-make and smelled the delicious vapours rising from the Tasmanian ex-pinot noir barrels in the bond store, and they make me very excited. Plus a new release from a Tasmanian distillery is always something to look forward to.

So there you have it. How successful I will be in my quest I’m not sure, but it’ll be fun to try. Onwards into the future!