The Whisky Waffle Podcast is back! With an additional exciting new feature: episode titles! Episode 6 is titled: Five regions… and Campbeltown.

– The Waffle, where we introduce Scotland’s five whisky regions… and Campbeltown

– The Whisky, where we taste two highland whiskies from very near Speyside, the AnCnoc 16 Year Old and the Glendronach 12 Year Old

– Whisky Would You Rather, where Ted makes Nick choose between his eyes and his stomach; and

– From the Spirit Sack, where we are asked a geographical question about whisky

Can whisky be Art? To be clear, I am not talking about the art of whisky making here, that semi-magical process where the unique personality and knowledge and skills of the distiller combine during the creation of the spirit to imbue it with the essence of that particular distillery. Nope, I mean the regular, picturey type.

Bottles and tubes usually have some sort of artwork on them, but that’s not Art right? That’s just advertising. Special edition releases containing very old and rare whisky often have striking, elegant and beautiful bottles and cases… but really, that’s just advertising for the sophisticated (and rich) buyer.

What then if you commission a renowned illustrator to produce the artwork for a special edition series of bottlings (even here, there seems to be conjecture as to whether illustration counts as Art. Anyone care to put forward a position?). anCnoc (pronounced ah-nock), produced by Knockdhu Distillery, did just that, recruiting Scottish born, currently New York based illustrator Peter Arkle to create artwork for a special set of limited edition releases. The name and artwork of each bottling in the series reflects a different aspect of the distillery, such as ‘Ingredients’, ‘Casks’, ‘Warehouse’ and ‘Luggage’ (a travel retail exclusive).

The bottle I possess is called ‘Bricks’… which rather does what it says on the tin to be honest. The artwork on the tube features a wall of bricks adorned by a bright yellow warning sign announcing ‘Remarkable Liquid’. anCnoc says that the release pays homage to their dunnage warehouses, wherein the walls are adorned by signs such as ‘Danger, Explosive Atmosphere’ and ‘Flammable Liquid’ (and probably more importantly, ‘No Smoking or Naked Lights’), reminding the occupants of the powerful forces at play.

The whisky in each edition has it’s own special twist; in the case of ‘Bricks’ that means a mixture of Spanish oak ex-sherry butts and American oak ex-bourbon barrels bottled at 46% abv. Straight up on the nose you can smell the sherry; this isn’t the heavy leather and dark wood drawing room vibe you get from some sherried drops though, but more like eating a packet of chocolate coated raisins on a sun lounge on the patio. At the back there’s also a delicate splash of grapefruit, pear and cinnamon.

I have come to the conclusion that my official tasting note for anCnoc is ‘dusty’, because I’ve found the same thing in every one that I’ve tried so far. It’s kind of like walking into a wood-work shop and breathing in that light dusting of wood powder that’s everywhere. Or perhaps walking down a forest track in summer with a light breeze stirring up dust from the earth and the vegetation. The spirit coasts lightly across the tongue, not like a brick at all, and ends with a delicious, crisp burst of citrus and raisins that lingers on for some time.

I can’t really speak for whether the ‘Bricks’ constitutes Art or not, but I rather suspect it lies in eye of the beholder and the value you place on such things. There is certainly one aspect of the work that I can give a definitive answer on though: it is indeed Remarkable Liquid. The Bricks possess the bright, summery lightness of other anCnoc’s that I have tried, but the addition of sherry introduces a complexity that takes it to a whole other level and I think perhaps that is where the real artistry lies. It does look rather spiffy on the shelf though. Perhaps I shall have to collect the whole set and contemplate the matter more deeply. 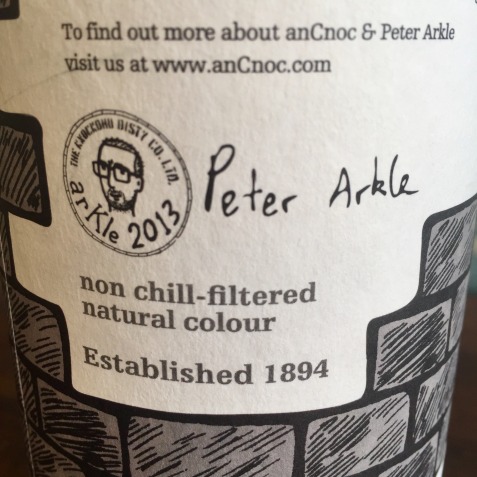 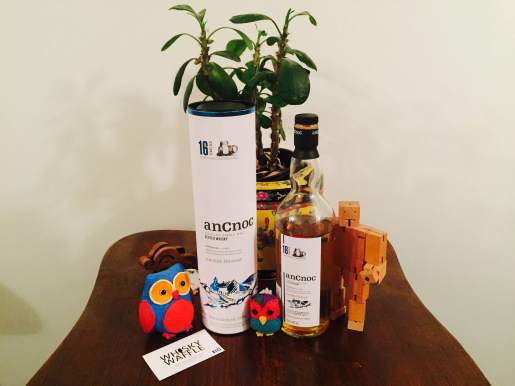 One of the fun things about whisky is that it can reveal to you a time and place as part of its character. If the anCnoc 12 Year Old is a summers day, then surely its older sibling, the 16 Year Old, is the evening.

Produced by Knockdhu Distillery, founded in 1894 and one of the smaller operating distilleries in the Scottish Highlands, the AnCnoc 16yo is a burnished gold in colour, darker than the straw-like 12yo.

On the nose the 16yo is smooth and sweet, with no hint at all of the occasional raw alcoholic jaggies lurking in the 12yo. Herbs, particularly mint, garnish a bowl of caramelised pears in syrup dolloped on Weetbix. The taste is sharp and bright, striking the upper palate. The finish is hot and bittersweet, drying the mouth and lingering for some time afterwards.

The AnCnoc 16yo is much better rounded than its younger kinsman, with maturity found through age. While the 12yo has the heat, dustiness and brashness of the day, the 16yo is the relaxing warmth of the evening. A perfect companion to watch the light fade on a clear summer night.